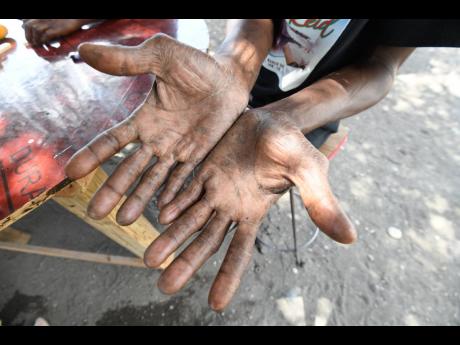 Ricardo Makyn/Chief Photo Editor
Kunlando Robinson explains, on April 17, how his now-healing hands were scarred while doing construction work for CHEC in Grants Pen, St Thomas. Robinson said the gloves he wore on the project were subpar. CHEC has been embroiled in several labour disputes over wages and work conditions. 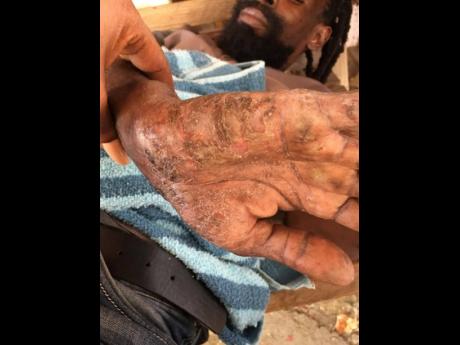 Contributed
Kunlando Robinson’s bruised hands more than a month ago.
1
2

The Public Procurement (National Development Project) (Montego Bay Perimeter Road Project) Order, 2021 stipulates that Jamaicans must represent 90 per cent of unskilled construction workers on the bypass of the resort city of Montego Bay and that half of technical positions be reserved for locals.

The order also compels CHEC to apply wage rates and the conditions of employment determined by the Joint Industrial Council, which involves three trade unions and the Incorporated Masterbuilders Association of Jamaica (IMAJ).

Labour relations have been a vexed source of debate between construction and union stakeholders and CHEC for years, with allegations of unchecked employment of Chinese nationals on major infrastructural projects.

Lenworth Kelly, president of the IMAJ, which represents a wide swathe of construction-sector interests, is demanding full Jamaican recruitment of non-technical labour, rejecting the proposed bar of 90 per cent.

Kelly has questioned what oversight mechanisms would be imposed to ensure that rates would be competitive and has sought clarity on the engagement of local contractors, engineers, land surveyors, quantity surveyors, and other professionals.

“It is taxpayers’ money being spent. Full Jamaican participation should be guaranteed below the technical/engineering level and justification provided for employing any foreigner at management or engineer level as those skills are available here,” he told The Gleaner on Thursday.

But Finance Minister Dr Nigel Clarke has defended the legislative order as groundbreaking, vowing that it would infuse equity into the construction sector and enforce employment standards on the proposed multibillion-dollar Montego Bay Perimeter Road Project.

Clarke said that the order provides for CHEC to develop apprenticeship programmes with HEART NSTA in technical areas in which foreigners will be employed. That stipulation, he said, was crucial to facilitating knowledge transfer to locals.

“When passed, this will have the force of Parliament that prescribes the terms and conditions. This is a higher level than a simple contract,” Clarke told The Gleaner Thursday morning.

Clarke said in Parliament on Wednesday that CHEC was retained to execute the construction in good faith because the Chinese contractors had already conducted feasibility analysis and preliminary works.

He told The Gleaner that tender exemptions have been allowed for decades.

“When Jamaica started energy procurement in the 1990s, the island started with sole procurement and direct contracting because the country did not have the capacity at that time to design or understand the complexity. It is the same trajectory with the highways,” the finance minister said.

Clarke warned that abandoning CHEC at this time would delay the project by two and a half years, pushing back completion of the project to 2026.

“For the future, once we have the technical help, we will be able to do the design ourselves and have multiple tenders,” he argued.

However, Kelly argued that a national development project should not be handed to an overseas-based entity, thus repatriating profits.

“The money must be so spent that it permeates the economy, stimulating economic activity and growth,” he stressed.

“Who built Jamaican roads before the Chinese came?”

Granville Valentine, president of the National Workers’ Union, described the legislative order as a step in the right direction. He is particularly pleased that the NWU, the Trade Union Congress, and the Bustamante Industrial Trade Union will partner, under the Joint Industrial Council, in policing construction standards. The IMAJ is also expected to play a role.

The trade unionist believes that local qualified contractors and investors should receive the same duty concessions enjoyed by Chinese companies.

“We want foreign investors, but we must have standards that our own can compete fairly and just,” Valentine told The Gleaner.

“We expect to be part of all these types of contracts going forward. ... I laud the minister, who invited us to the table, so we never had to bawl out and block road after the fact.”

Approximately J$1.2 billion is expected to be spent this fiscal year. The project has not been tagged with a final cost, but industry stakeholders forecast a budget of at least J$30 billion.