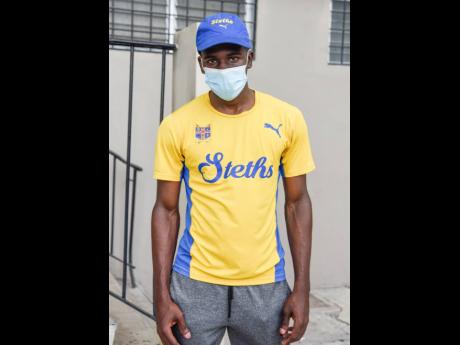 Nicholas Nunes/Photographer
Daniel Binns, 18, of St Elizabeth High, says he would be devastated if his COVID-19 test came back positive. Under new health protocols, a negative COVID-19 result is required for athletes, coaches, journalists, and field personnel, among others. 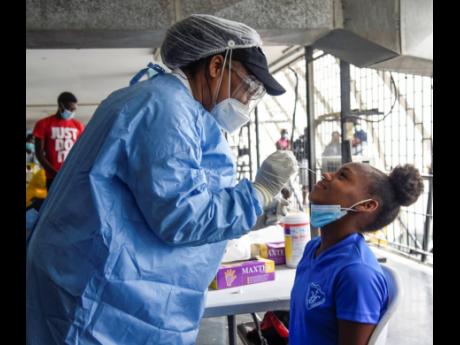 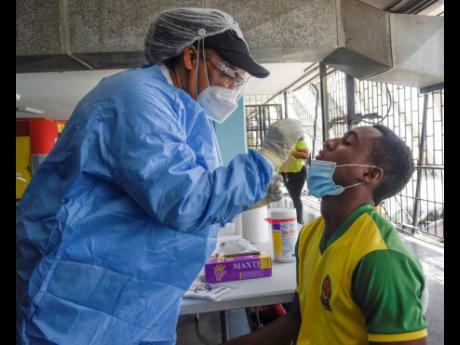 Nicholas Nunes/Photographer
Jaylan Lewis of B.B. Coke High School is swabbed for a COVID-19 test by Claudia Ramsay at the National Stadium on May 8. Lewis is a CAP student who will partake in the Class One sprint relay medley at Boys and Girls' Champs.
1
2
3

Looking to the clock and waiting for distances in the jumps and throws to be posted were once the picture-perfect frame of anxiety that captured an athlete’s wonder at placement.

Now, athletes from dozens of schools are anxiously awaiting the results of COVID-19 tests that have presented a major pre-competition hurdle that could decide whether they will participate in Boys and Girls’ Champs or be forced to watch on TV.

The five-day event, which will run from May 11-15, normally attracts tens of thousands of spectators, many from overseas, but will be staged in a bio-secure bubble to empty stands at the National Stadium because of the threat of COVID-19.

Under historic ultra-strict protocols, athletes, coaches, field personnel, and journalists have had to undergo mandatory COVID-19 testing, requiring a negative result to be admitted to the venue.

Daniel Binns, 18-year-old St Elizabeth Technical High Class One 400 metres runner and hurdler, said that while the absence of spectators will have some impact on him and other athletes, it will not affect their performances.

“As a small rural school, we never have a large turnout at our school championships. However, hearing the support coming from the other schools will boost us,” he told The Gleaner, adding that he thinks schools like Calabar, Kingston College, and other prominent Corporate Area teams could be more affected.

Binns disclosed that uncertainty over the results of COVID-19 tests was weighing on the minds of competitors, who would be devastated if they were forced out after a stop-start season because of the pandemic.

St Catherine High hurdler Toni-Ann Blair said she would definitely be affected by not hearing the buzz of supporters – for her school or others – in the stands.

“It really motivates us to push through if we are giving up,” Blair, a Class Four athlete, said of the excitement generated by spectators.

Like Binns, she, too, said she would be gutted if her COVID-19 test returned positive. Blair said she has been training for almost a year, putting maximum effort into preparation for Champs – the greatest sporting spectacle in Jamaica that is a test of wills and strength.

COVID-19 has reordered global societies with restrictions on the most routine of human interaction - including the whoops of joy on the field and backslapping commendation that come naturally with sporting camaraderie.

But social distancing and sanitisation guidelines have rewritten the ground rules of how athletes and coaches interface. Jamaica has registered 46,708 COVID-19 infections overall, with 806 deaths.

Longer weekend curfews have been credited with driving down infection rates that hovered over 30 per cent in March.

“It has been a lot different. About 10 persons are allowed on different days. Only about half of the track team can show up on any given day and we have to wear masks,” Blair told The Gleaner.

Blair’s teammate, Jerese Allwood, who competes in the Class Three 80 metres hurdles and the 4x100 metres relay, was adamant that her performances would not be affected by the vaccuum into which the National Stadium will be transformed this week.

“All I have to do is stay focused and do what I have to do. Waiting for the results of the COVID test and a positive test result will be more disappointing to me. We have put in a lot of work,” she said.

Allwood said that the training regime has indeed been different for her, with strict restrictions on the borrowing of exercise gear and training material like mats.