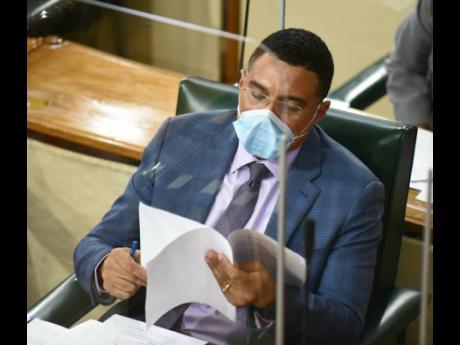 Kenyon Hemans/Photographer
Prime Minister Andrew Holness pores over a document during Tuesday’s sitting of the House.

Insisting that the Government was on a bad legal footing and accusing the Holness administration of “selling out” the country as it sought to have China Harbour Engineering Company (CHEC) build the Montego Bay Perimeter Road Project, Opposition Leader Mark Golding said the order should be withdrawn.

The opposition leader argued that for the order to have been valid, the Montego Bay Perimeter Road Project should have been approved by Cabinet and Parliament as a national development project.

Golding said he made checks and no such approval was given by Parliament.

“The order itself, which is a signed order seeking to be affirmatively approved by this House and the Senate, doesn’t provide in it any approval of the project as a national development project,” the opposition leader argued.

Golding contended that the role of the order instead is to exempt the project from the provisions of the Public Procurement Act. The order also seeks to tie CHEC to wage rates agreed by the Joint Industrial Council and impose minimum labour quotas of 90 per cent and 50 per cent for unskilled and technical local workers, respectively.

“The order is bad on its face and should be withdrawn because it has not been approved by Parliament,” Golding charged.

Construction of the Montego Bay Perimeter Road Project is expected to begin by late 2022. Unlike other major road projects before it, taxpayers will be paying for its construction upfront.

The bypass, which involves the construction of 25 kilometres of roadway, consists of two segments.

These are the 15-kilometre Montego Bay bypass, starting from Ironshore and back around to Bogue Road, and the Long Hill bypass involving the construction of 10 kilometres of highway from Montego Bay down to Montpelier.

But Attorney General Marlene Malahoo Forte rubbished Golding’s assertions that there was a defect with the order. Quoting the Interpretation Act, she argued that orders do not come in effect until they are published in the Gazette and any date which might have been signed by a minister is inconsequential to the order being in effect.

He suggested that the competitive bidding process be used as was done to have the East-West Highway built.

In brushing aside Holness’ argument that it would not be fair to CHEC, which would have done substantial design works in anticipation of leading the project, Golding said he was more concerned about being fair to the Jamaican taxpayer. The project was to be originally backed by Chinese cash.

“But just to give this foreign multinational the project at some negotiated price arrived at behind closed doors, without allowing other interested and qualified contractors to bid for the work, provides no transparency, no assurance of Jamaica getting value for taxpayers, and that is not being fair to the Jamaican people,” Golding said.

“It is selling out the Jamaica people,” Golding added.

Holness countered the Opposition, saying that the concern about transparency should have been addressed with the PNP administration when it was engaged in bilateral talks with CHEC. He said that the project had been in gestation for 20 years.

Holness said the binding agreements ensured that contract documents could not be shared.

“We on this side don’t sit on this side neglecting your best interest as would be the suggestion of the Opposition,” Holness said.

The prime minister maintained that Jamaica had to act in good faith, maintaining that it was no fault of CHEC that Jamaica changed the borrowing arrangement and chose to fund the project itself.

Holness argued that the tender process for the project would span a year with “the best effort”.

The prime minister said incoming contractors would want to independently verify the risk involved with conducting a project of that scale. Many, he said, would want CHEC excluded because the company would have had an unfair advantage given that it had already done preparatory work on the project.

“We looked at what is in Jamaica’s best interest by virtue of time. We know the longer we wait to do this, the more the price of the project is going to escalate,” Holness said.