Westmoreland community yearns for opportunities to turn back on crime 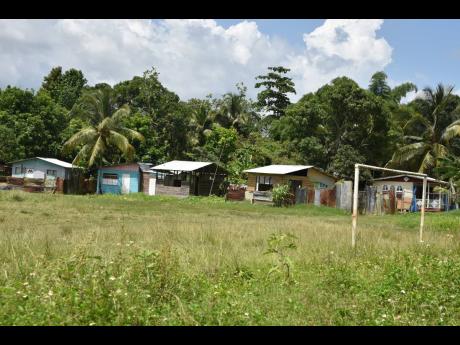 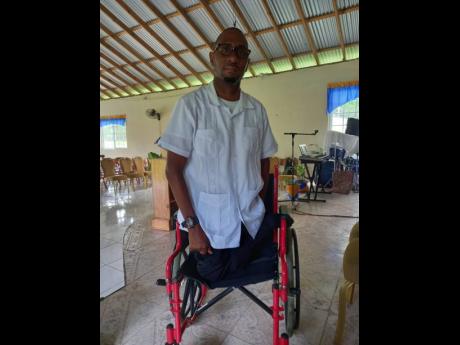 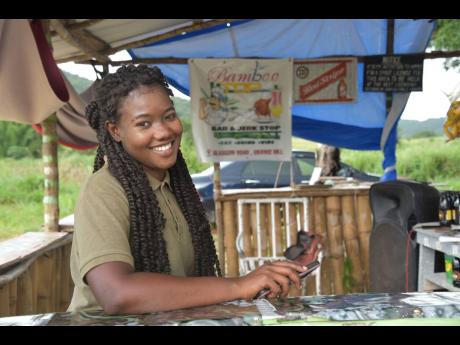 Photo by Mark Titus
Twenty-two-year-old Sherece Forrester has opened a bar in her Grange Hill community. She would like to see more opportunities in the area for the youth to develop their skills and land jobs. 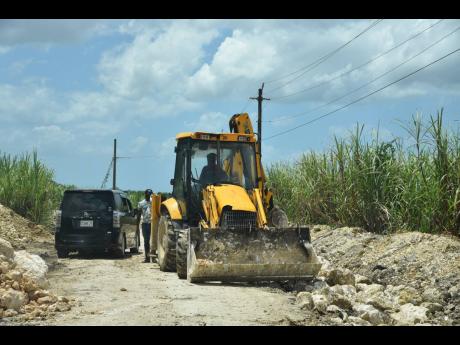 Photo by Mark Titus
A section of Glasgow Road in Grange Hill being repaired. Residents have complained of years of neglect. 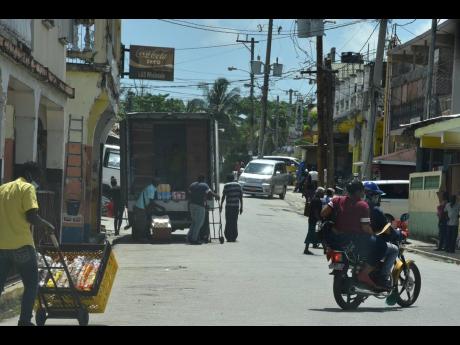 Photo by Mark Titus
A buzz of commercial activity in a section of Grange Hill, Westmoreland. 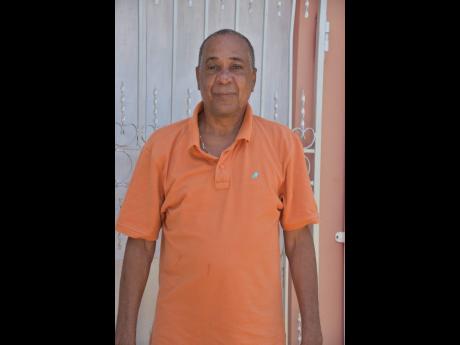 With very limited opportunities available to improve their lives in the poverty-stricken communities of Grange Hill, Westmoreland, the scores of school leavers in the area are being lured into a life of crime and gang violence. Grange Hill, which...

With very limited opportunities available to improve their lives in the poverty-stricken communities of Grange Hill, Westmoreland, the scores of school leavers in the area are being lured into a life of crime and gang violence.

Grange Hill, which is among the hotspots for crime in the Westmoreland Police Division, has been a bloody battleground in recent years with several deadly conflicts allegedly over the sharing of ill-gotten loot from lottery scamming among hoodlums from the notorious Kings Valley Gang.

But the youth living in the plethora of unplanned communities in the once sugar-dependent village says the failure of successive governments to action a workable plan for the disenfranchised should also be considered criminal.

“We don’t condone wrongdoing. We are good people, and Grange Hill is a good place. All we want is an opportunity to better our lives, be successful like everyone else,” said 22-year-old businesswoman Sherece Forrester, a graduate of Rhodes Hall High in Hanover.

“Youth in my age group have no interest in cutting cane, but it appears that the authorities expect that we should all go in the cane fields to work, because all these years and no one saw the need to put a HEART school in Grange Hill,” she lamented.

“There is nothing in place to prepare a school leaver for the BPO (business process outsourcing) or hotel sector or the work world in general. As far as I see, nobody cares about the youth; it is all talk for fancy sound bites,” quipped Forrester, who still hopes to pursue her dream of becoming an interior designer, despite opening her bar just six months ago.

“I am not giving up on that dream, but being a young mother, I had to get something going to support my babyfather’s effort to provide for the family, but there are many in Grange Hill who have ambition and would want to improve their grades or even get a skill, so the struggle is real,” she told The Sunday Gleaner last week.

Our news team approached a group of four females – two with young babies – seated in a tenement yard in the community of Peggy Barry. They expressed no fear in moving around in the area.

“As females, no one interferes with us, but I am not sure about a male … . It depends on what you are involved in, but we can go anywhere in Grange Hill,” said one of the women, adding that she graduated from Frome Technical High School with six Caribbean Advanced Proficiency Examination passes, but cannot find a job.

“Opportunities scarce. There is nothing to do; nothing to challenge us. Not even a homework centre,” she added, pointing to the neglect of the area.

She concurred that farming was not as appealing to the youth as it was to generations past.

“Nobody in our age group is going into farming because they come and see that it has done nothing for their parents or grandparents, so they are not interested,” she said.

Neglect seems to be a dominant theme in the area with roads in terrible condition and residents in areas such as Glasgow Road having to purchase trucked water. Internet service is also a luxury for some, shutting many students out of virtual classrooms in the COVID-19 era.

There are five community football fields throughout Grange Hill, including the Belle Isle Road community park, where major games of national interest are at times hosted, but all are now overgrown with shrubs. The facility on Mint Road near the town centre has been captured by squatters. This leaves nowhere for recreational activities, but to remove the illegal occupants would be political suicide for either party.

“Everyone that captures a piece of the land are political workers for the PNP or the JLP, so no one will touch them,” one resident told The Sunday Gleaner.

Five informal communities – Church Lincoln, Linton Pen, George Lai Road, Top Lincoln and Kings Valley – can be found in Grange Hill, but Councillor Lawton ‘Jimmy’ McKenzie says the lack of attention to his division is not due to poor representation on his part.

“I have fought with my own party to get the benefits for Grange Hill, but nothing has come our way,” said the veteran politician. “It can be said that I started these squatting communities because wherever I placed the basic amenities, the people moved in overnight and took the land. But to cut crime, you have to reduce poverty, and a lack of attention from both governments has caused the affected communities to be as they are today.”

‘This is not the Grange Hill I grew up in’

Superintendent Robert Gordon, who heads the Westmoreland Police Division, told The Sunday Gleaner that most of the homicides in the Grange Hill area result from internal conflicts among gangsters.

“Crime would have been trending down in the Grange Hill area. However, since April of this year, there has been an upsurge in violence and that emanates out of what appears to be gang conflict,” said the veteran crime-fighter.

Gordon said that until a number of killings recently, serious crimes in Grange Hill had been trending downwards since he took command two years ago. He advised that between January 1 and May 13, five more murders had been committed than the three recorded over the corresponding period last year, while there have been five reported incidents of shootings, compared to three in 2020.

A total of 32 killings were committed in the parish since January 1, which is a 19 per cent increase to the 27 homicides recorded last year. Westmoreland falls behind St Andrew South (70), St James (60), St Catherine South (53), Kingston Western (42), and St Catherine North (38) as the key contributors to the 497 homicides in Jamaica to date.

The police are convinced that the recent homicides in the area are also gang-related, and have recently held seven individuals, including three females, for questioning.

In May 2018, seven persons, including two children, were killed and 17 patrons injured when gunmen sprayed a restaurant with bullets. Nine alleged members of the Kings Valley Gang were charged, but were subsequently freed by trial judge Chief Justice Bryan Sykes, who pointed to inconsistencies in the statement of the main witness, himself a former member of the gang.

Residents say things had been relatively quiet since then – until the killings last month. They watched suspiciously as the Sunday Gleaner team entered their community just days after a police raid. With one road in, one road out, Kings Valley is typical of informal communities with board houses built close together lining one side of the road.

The deafening silence was broken by a sharp shout of praise from an amplified system from the Kings Valley Lighthouse Deliverance Church of God, which is led by Apostle Alton Spence and his wife Camille. They have been serving the community for the past 11 years.

The apostle, who has lived in Grange Hill all his life, says his congregation numbers around 60, mainly folks from outside of the community.

“You won’t see them (residents) at church, but if someone got shot, or even died, is the time they listen to the church, but this is where all the dead from the community are churched,” he said.

“Lack of employment opportunities will cause people to do things that are not right, so if the Government could introduce some programmes, it would make a big difference, because there is a Jamaican saying that the devil finds work for idle hands,” said Spence. “But this is not the Grange Hill that I grew up in. The violence has gotten out of hand, but I am praying for a spiritual turnaround.”

Further in the community, residents observed our every move from their yards, but none returned the greeting offered by the team. There were no gatherings at spots where we were told that we might find community leaders.

The community playing field was the best kept in the Grange Hill area, but still showed the need for some care.

A young man who was seated at a spot overlooking the play area acknowledged our greeting but kept his eyes glued to his cell phone. He would not give a name, but said he was a student at Belmont Academy in the parish, and nodded when asked if he has lived in Kings Valley all his life.

“You would not be able to drive in here if it was not safe,” he said without taking his eyes off his device, when asked whether he thought Kings Valley was a safe place. He would not utter another word.

Robert Murray’s one-room board house is all he owns, and even though it is located on captured land, he is not expecting an eviction.

“It is a way of life, it has been like this since I was born,” he told The Sunday Gleaner.

Murray is disappointed with the level of violence in the area, but is confident that people in his age group are safe.

“This is not violence towards elders,” he said. “This is about young people – friends against friends. The loot is never shared well, so we are not targets. We safe.”

Morland Wilson, who defeated established political giant Dr Wykeham McNeill last September to become the member of parliament of Westmoreland Western, in which Grange Hill is located, acknowledged that positive engagement with the youth involved in lottery scamming and gang violence is crucial if there is to be any effective change.

“What is needed urgently is more justices of the peace in our communities and training centres to engage our youth,” Wilson said. “I am also making representation for the establishment of a justice reform centre, which is crucial to the process of restoring the community of Grange Hill to normalcy.”

Wilson believes the proliferation of board dwellings on government or privately owned land throughout his constituency can be fixed, and he has begun the engagement for some of the underutilised sugar lands to be sold to the illegal occupants.

“Land tenureship in Westmoreland is the most long-standing, the most contentious, and the most stressful aspect of the development of the constituency,” said Wilson. “It has been ignored over the years, but must be confronted and dealt with if we are serious about development.”