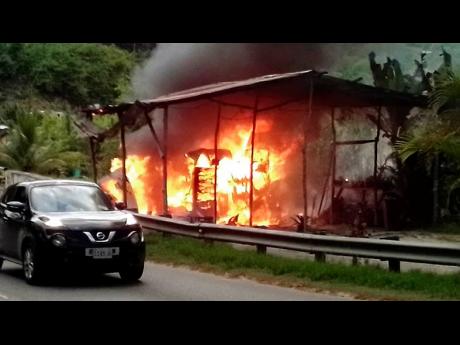 Photo by Hopeton Bucknor
The burning building which housed a car was and bar operation, which was also allegedly set afire by the suspect.

A jealous boyfriend in Great River, Hanover, is on the run after allegedly dousing a woman with gasolene and setting her afire yesterday, much to the horror of bystanders.

The incident is the latest in a grim roll of cases of violence against women over which there has been sustained public outrage even as dark clouds hang over a lawmaker.

The woman was left completely nude after several persons rushed to her rescue, using counter flour and a blanket to put out the fire that had engulfed her.

The police, who were early on the scene, rushed the woman to the Noel Holmes Hospital, where she was admitted in a critical condition.

The boyfriend, who is said to be from Westmoreland, is now being sought after fleeing the scene.

Reports are that the couple, who operate a car wash and bar at Great River, were at the location at about 4:30 p.m. when the boyfriend accused the woman of disrespecting him. In a fit of anger, he reportedly doused her with the flammable substance before setting her ablaze.

He is alleged to have then also soaked the premises with gasoline before lighting it as well and walking away.

Residents in the proximity of the bar and car wash who went to investigate the fire were able to rescue the woman as she ran out of the building. However, they could only look on helplessly as the building burned.

When The Gleaner arrived at the scene soon afterwards, the woman, whose scorched skin bore witness to the vicious attack, shouted that it was her boyfriend who had set her on fire.

“Mi nuh know what wrong wid him. Him jealous over mi an seh mi a dis him an' set mi pon fire,” she said.

The incident comes in the wake of a St Catherine teen losing her life last week reportedly at the hands of a 21-year-old man whose advances were being spurned.

Two weekends ago, a Trelawny woman was also killed, allegedly by her common-law partner.

The spate of attacks are also being overshadowed by a video, which surfaced last month, showing a man beating a woman with his fists and a stool. The police had sought lawmaker George Wright as a person of interest but closed their investigation citing Wright and Tannisha Singh's, the woman believed to be in the video, unwillingness to press charges, adding that the footage was inconclusive. The two had both made assault reports against each other over an April 8 incident.

Wright, who is currently on a two-month leave of absence from Parliament, has not yet yielded to pressure to resign.