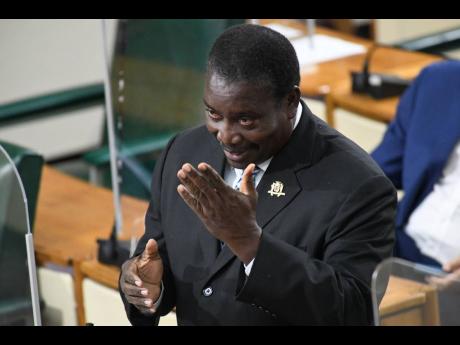 The Government has modified the Special Mining Lease (SML) 173 to Noranda Jamaica Bauxite Partners II to mine 8,335 hectares of land in the Cockpit Country.

Minister of Transport and Mining Robert Montague announced on Wednesday that the Holness administration has acted on the advice and direction of the commissioner of mines and has adjusted SML 173.

In his contribution to the Sectoral Debate in Gordon House, Montague said that the change has resulted in approximately 6,000 hectares of land being removed from the original SML.

Montague told his parliamentary colleagues that the 6,000 hectares removed from SML 173 would be replaced with additional lands to Noranda, with SML 71. He said that SML 71 is adjacent, on the east of where the company is currently mining (SML 165).

“By replacing what was removed, we have satisfied not only the provisions of the law but the Establishment Agreement and the conditions of the licences,” he added.

There has been ongoing debate on the defined boundaries of the Cockpit Country, with environmentalists and lobbyists contending that SML 173 and other sections of west-central Jamaica should be declared off-limits to bauxite mining.

Both environmentalists and farmers had expressed concern over the potential damage that bauxite mining could have on the ecologically sensitive area.

The mining minister acknowledged that residents in Trelawny had raised concerns about the boundaries of the Cockpit Country. Montague said he held talks with the residents, as well as experts in geology, mining, and development.

Meanwhile, the mining minister reported that the Government has begun talks with the owners of the Bengal 910 development to identify suitable lands with the same or better-quality limestone.

“We have begun preliminary talks with them. No decision or agreement has been reached, but we have indicated to them our intentions,” said Montague.

“Our prime minister believes in, and is a champion for the environment and will continue to balance lives and livelihoods.”

Residents have sought to block mining in the ecologically sensitive Puerto Bueno Mountains on Jamaica’s northern coast by suing the Government and the mining company for alleged breaches of constitutional rights.

Eight persons filed their claim in the Supreme Court late last year against the attorney general, the Natural Resources and Conservation Authority and Bengal Development Limited, the owners of the 569-acre property in St Ann.