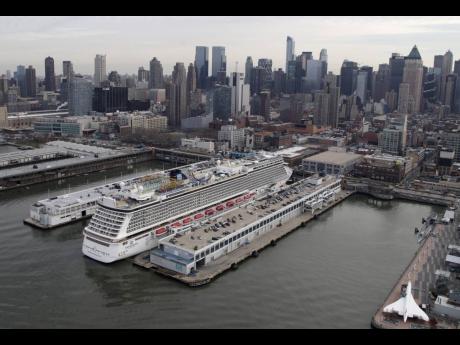 AP
In this December 1, 2013, aerial photo, the cruise ship Norwegian Breakaway is berthed on the westside of Manhattan in New York. Norwegian Cruise Line has revealed that it will redirect Breakaway to Alaska, effectively killing plans for an August 7 revival for cruise shipping in Jamaica.

WESTERN BUREAU: Norwegian Cruise Line (NCL) has redeployed its ship that was booked to homeport in Montego Bay, Jamaica’s Minister of Tourism Edmund Bartlett has confirmed. NCL’s Breakaway was set to begin service in the tourism capital on August 7...

Norwegian Cruise Line (NCL) has redeployed its ship that was booked to homeport in Montego Bay, Jamaica’s Minister of Tourism Edmund Bartlett has confirmed.

NCL’s Breakaway was set to begin service in the tourism capital on August 7 in what was expected to be the welcome return of the first cruise line to the island for business since the coronavirus pandemic caused the industry to capsize in March 2020.

A less-than-favourable forecast has caused NCL to change course for Alaska.

The vessel, which typically has an occupancy of approximately 3,800 passengers, would have operated at 50 per cent capacity, in keeping with current COVID-19 protocols for cruise shipping, Bartlett had said in his Sectoral Debate presentation in April.

The development was described as a game-changer that would have strengthened linkages with key sectors such as agriculture and manufacturing. Approximately 570,000 cruise visitors had been projected for the calendar year.

The news has taken local tourism stakeholders by surprise.

In an interview with The Gleaner Tuesday afternoon, the tourism minister said he spoke with cruise ship operators who disclosed that a western Caribbean route, which includes Jamaica, was not gathering strong enough interest.

“But they will looking at coming back here after the summer,” said Bartlett.

In the meantime, he said there was a lot of energy building up for the resumption of the Caribbean itineraries for larger players such as Carnival and Royal Caribbean cruise lines, but he was concerned about the weighty protocols of the Caribbean Public Health Agency.

“Their protocols are much stronger than the CDC,” Bartlett said of the United States-based Centers of Disease Control and Prevention.

He did not disclose specifics on the protocols.

Pointing out the debilitating challenge of vaccine inequity, Bartlett said that it defeated the purpose of the cruise ship passengers coming into the Caribbean where vaccination is as low as three per cent.

The Jamaican tourism minister has been campaigning heavily for vaccine equity – an appeal that was renewed during the just-concluded Global Tourism Recovery Summit in Saudi Arabia.

The summit focused on efforts by the global community to restart the tourism industry with leadership and coordination, but Bartlett fears a greater humanitarian challenge will emerge if vaccine supplies are not distributed fairly.

“Too many countries will find their economies in tatters and the livelihood of their people in peril. Jamaica is at risk because we have a low vaccination level of less than 10 per cent and that is of concern,” the minister said.