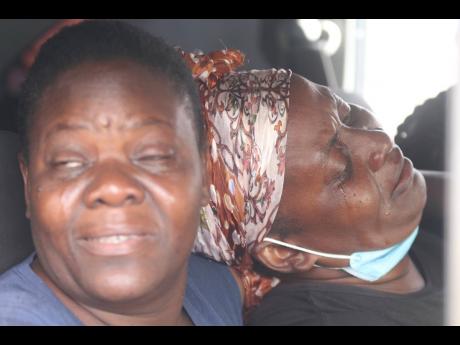 Nathaniel Stewart/Photographer
Andrea Miller (left) comforts her niece Ann-Marie Salmon, the mother of 17-year Janoy Blair who died after a crash in Hayes, Clarendon, on Saturday night. Kevaugh Salmon, 20, also succumbed to injuries. Residents protested in the streets on Sunday, alleging that the police had shot up the vehicle. 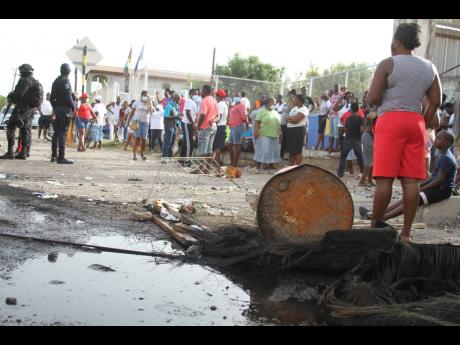 Nathaniel Stewart/Photographer
Police keep close watch as residents of Top Hill protested in front of the Hayes Police Station Sunday morning, alleging that the police shot up a vehicle in which two males died and several others were injured.
1
2

Devon Ramcharran’s 16-year-old daughter Carmelita’s future hung in the balance as he grappled with an emergency call from doctors on Sunday evening for her to be transferred to the Kingston Public Hospital for further treatment.

The Garvey Maceo High student was one of several children injured in what appeared to be a breakneck crash moments after Saturday's 8 p.m. national curfew took effect, killing a teen and a young man and sparking an explosive conflict on the streets of Hayes, Clarendon, the morning after.

“She keep having pain in her head. If you touch her head, she bawl out. The doctors say KPH have more advanced machine to do some scanning. Them say them nuh waa keep her any longer,” Ramcharran said of the advice given by medical staff at Lionel Town Hospital.

Carmelita is due to sit several Caribbean Secondary Education Certificate examinations, which her father is also worried that she might have to miss after months of gruelling study.

“Her teacher call me today and a explain to me that she nuh know how it a guh go. Her guidance counsellor say if she still in the hospital and make improvements, they can make she even finish up her SBAs from her hospital bed,” the distressed father said, referring to school-based assessments.

Residents in Top Hill district mounted a fiery protest on Sunday, lamenting that the vehicle transporting the children crashed after it had been shot up by the police. One relative told The Gleaner that eight teens and a 20-year-old were travelling in the Nissan AD Wagon motor car.

The police have disputed the claims, saying that the driver of the Nissan AD Wagon motor car disobeyed their signal to stop. The cops reported that as they approached the crash site, shots were fired at them. The police said they returned the fire but that no one sustained gunshot injuries.

The driver of the car, 20-year-old Kevaughn ‘Panda’ Salmon, an aspiring soldier, and his 17-year-old cousin, Janoy Blair, student at Garvey Maceo High in the parish, were killed in the incident.

Their deaths have compounded their family’s pain as the two were killed on a return trip from grave-digging preparations for the family patriarch.

“Me cyaa manage no more ‘cause me father nuh bury and now me two nephew. Me cyaa take no more, and every time me sister (Jahnoy’s mother) a faint out,” said a weeping Mercinth Salmon.

Relatives and community folk described the deceased and injured as well-behaved youth who steered clear of trouble.

The Gleaner understands that Salmon, who was a member of the community’s police youth club, had recently been recruited to serve in the Jamaica Defence Force and was also slated to report for his first day of work at the alumina refinery company, Jamalco, on Monday.

Residents contend that Salmon and one of the teens sustained gunshot wounds, but those accounts have not been independently verified.

The protesters argued that the police drove fear into the youngsters as the lawmen were travelling in an unmarked vehicle and were beckoning to them to stop in a dark area.

“[Of the] nine a them, eight a them a school pickney and yuh kill off the pickney them ... . It look like them call the next police station and them block the road pan them and a bare gunshot pan the car,” cried Maxine, an aunt of one of the injured teens.

Maxine, who disclosed that her 17-year-old nephew was on life support, said that other teens were in critical condition.

“An’ yuh can listen fi waa next two dead ‘cause them stay bad,” she added.

Relatives said Ann-Marie, who suffers from a heart condition, had been rushed to the hospital twice since her son’s death.

Pearnel Charles Jr, member of parliament for Clarendon South Eastern, who visited the area on Sunday, said he was requesting a full and comprehensive investigation into the incident.

“There’s a lot of speculation as to what led to the injuries, the accident, and the death of the two persons, and so I’ve reached out to all relevant authorities and I’ve spoken to the family members of some [of the victims] and the community members, and I’ve asked that anyone with credible information to pass it on to the police and INDECOM (the Independent Commission of Investigations)” he said.

The Inspectorate and Professional Standards and Oversight Bureau, traffic investigators, and INDECOM are probing the incident.