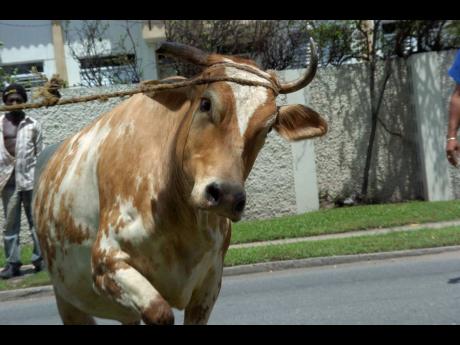 File
The part-time farmer's body was found with hoofprints all over him.

A part-time farmer of Haddington-New Mills in eastern Hanover is suspected to have been killed by one of his cows on Sunday.

Relatives found the body of Audley Walker, alias Maxwell, on the ground near the cow. Hoofprints were reportedly seen all over his body.

The Sandy Bay police were alerted to the incident on discovery of the body, but up to 4 p.m., residents and relatives were still awaiting their arrival at the scene.

Walker, who lived alone and worked at a pastry outlet in Montego Bay, reportedly left home about 6 a.m. on Sunday on one of his usual treks to tend to his animals but never returned home as expected.

“He would usually return home about two hours later on a Sunday to attend church,” a resident of the area told The Gleaner.

“But when he never returned home to go to church, everyone sort of got suspicious.”