‘No more board house’ 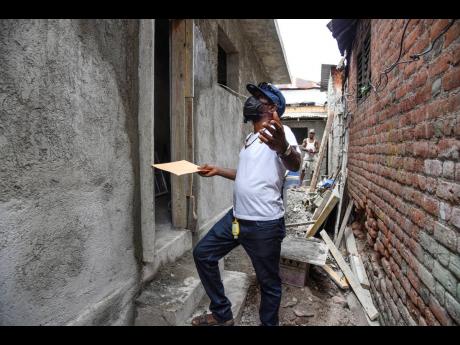 Nicholas Nunes/Photographer
Love Lane resident Lloyd Humber is rebuilding with concrete after his downtown Kingston board house went up in flames last December. 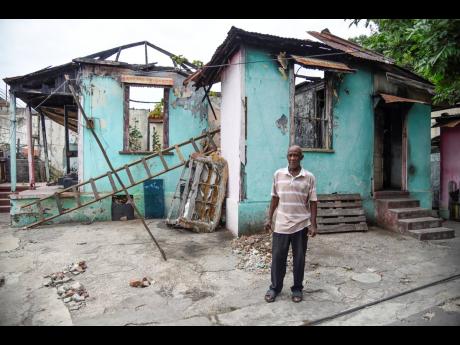 Nicholas Nunes/Photographer
Sixty-seven-year-old Alton Williams still lives in a section of his home which was damaged by fire in 2018. 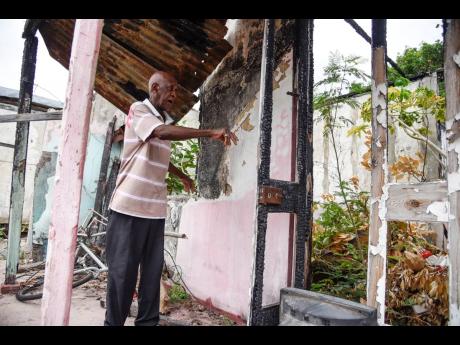 Nicholas Nunes/Photographer
Alton Williams says he was at a bar having drinks when he heard that his Rosemary Lane home was on fire three years ago.
1
2
3

On December 23, 2020, Omare Brown had the “worst experience of my life” as he lost everything in a fire that consumed his home and those of more than 20 other families at Church Street and Love Lane in downtown Kingston.

“The fire didn’t start here; we just got burnt out in the process,” recalled Brown, who was living at the premises with his grandmother and her best friend at the time of the fire.

“Everything is concrete now. No more board house,” the 40-year-old said of the new, more sturdy 89 Church Street residence.

However, at present, he said the roof is made of board and zinc as the building needed to be fast-tracked for the elderly people with whom he resides to move back in.

His household numbers among the many families across the capital city picking up the pieces after fires in recent years. Many are erecting concrete structures to replace the rickety decades-old shacks they once called home.

Love Lane resident Lloyd Humber believes the area needs to be rid of old houses, shacks and illegal electricity connections – factors which could trigger disaster in the blink of an eye.

“Until that happens, we can’t fully prevent fires. We are building with concrete and it’s costing us an arm and a leg. We can barely done it,” he bemoaned.

For more than three decades Humber had been residing with several other family members in the board home gutted by fire last December. He is pleased that the new home is being professionally wired and he intends to reconnect to the Jamaica Public Service grid for electricity.

Still picking up the pieces after a January 2020 late-night fire in central Kingston, which left close to 20 persons, including children, homeless is 36-year-old Kadian Samuels.

She was sleeping when the blaze woke her up. She said that although firefighters theorised that it was a case of arson, the situation had worsened because all the dwellings were made of zinc and board.

“I have been recovering slowly. I am putting up a concrete structure, but it’s not finished,” said Samuels, who lives with her spouse, two children and an uncle.

“If a fire occurs again, which we hope not, the concrete will back it up more than the board. A certified electrician is gonna come and fix it up, ‘cause that was not the case before,” she added.

Sociologist Dr Orville Taylor told The Gleaner that there is always a correlation between having a secure home environment and poverty.

“The poor are just not able to afford the kind of infrastructure that would prevent fires from taking place. It takes a lot of work for a house to be properly wired and to be certified, for the purposes of supplying electricity,” he explained.

He reasoned that crowding remains an issue, and with that comes greater competition for access to electricity.

“The buildings sometimes just may not be suitable, and so you’ll find that houses in lower-income areas are more susceptible to electrical fires,” Taylor pointed out. “The kind of building material also has a part to play. Usually, it’s more flimsy, more inflammable, and they are more likely to build their houses out of things which are easier to ignite.”

The sociologist explained that there is also a connection between poverty and the likelihood of children starting fires.

He said that in inner-city communities and tenement yards, parents take more chances and leave their children at home “for what they consider to be a brief period because they think it is relatively safe”.

It’s a situation 67-year-old Alton Williams can identify with. The owner of a seven-room dwelling on Rosemary Lane which was significantly damaged during a March 2018 fire is yet to begin rebuilding efforts. He lost all his belongings in the blaze, including an ice maker, a dining set and appliances.

“Everybody hustle a likkle light, even though it’s dangerous, but is a hot plate did burn it down last time,” Williams told The Gleaner.

He recalled that his tenants left meals cooking at the back of the house while they gathered in the lane talking.

“Out a di bar mi deh a drink and hear seh mi yard a burn down clean, clean,” said an animated Williams.

“Because some of it mek out of pitch-point board and zinc, it light quick. When I come, a ball of fire come out of my house and roll in the road and I turned back and said, ‘Let it burn’, and the fire brigade came after that,” Williams recalled.

He resides in a section of the property that was not affected by the fire, although his dwelling still harbours fire hazards.

The Kingston and St Andrew Division of the Jamaica Fire Brigade responded to 3,164 calls in 2019, 259 of which were residential.