Concerns over transparency as licensing revenues could crash 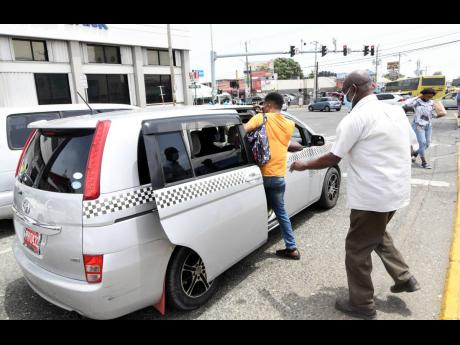 Rudolph Brown/Photographer
Passengers board a taxi in the high-traffic hub of Half-Way Tree, St Andrew, on Wednesday. Cabbies are concerned that the entry of Uber into the local market could further marginalise licensed taxi operators. 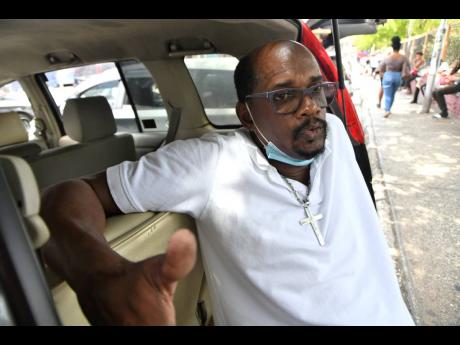 Rudolph Brown/Photographer
Taxi driver Howard: “If Uber doesn’t get the approval from the Transport Authority or the Government, dem illegal and should not be allowed to run in the system.”

Rudolph Brown/Photographer
Passengers board a taxi in the high-traffic hub of Half-Way Tree, St Andrew, on Wednesday. Cabbies are concerned that the entry of Uber into the local market could further marginalise licensed taxi operators.

Rudolph Brown/Photographer
Taxi driver Howard: “If Uber doesn’t get the approval from the Transport Authority or the Government, dem illegal and should not be allowed to run in the system.”
1
2
3
4

A consumer lobby is pressing the Holness administration to demand greater clarity from multinational ride-share company Uber on its local operations branded by transport officials as “a new designation” that drew warnings about circumventing Jamaican law.

As public authorities appear to remain in the dark about the legality and nuts and bolts of Uber’s operations, Trevor Samuels, spokesman for the National Consumer League, is cautioning that commuters and other stakeholders must know whether the State has given its full blessing to the ride-share entity.

“Obviously, people are happy with them abroad, but we need to know how they operate.”

That call comes amid early confusion on how Uber will navigate the Jamaican market, but the company is not unfamiliar with bumpy rides after cabbie revolts and a slew of lawsuits internationally.

Robert Montague, the transport minister, has been noticeably quiet about the two-day firestorm, but Uber’s pushing of the envelope may stir discourse on whether there is need for legislative change to corral an important source of government revenue and a force to impose order.

Licensing and processing fees are projected to net $1.3 billion for state regulator the Transport Authority in fiscal year 2021-2022, more than $200 million above its estimated earnings for the prior COVID-19-hit period.

Uber said on Wednesday that all leases are covered by Guardian Insurance from the moment the lessor partner accepts the lease requested by the user via the Uber app and ends when the last passenger exits the vehicle.

The app serves as a contact portal between lessor partners and users, who will agree to sign a private lease contract every time they travel in Kingston.

“In consideration of Uber’s provision of the Uber Services, the lessor partner agrees to pay Uber a service fee per vehicle lease and driver services agreement. This fee is a variable service fee based on time and distance that will allow the lessor partner a flexible and secure way to earn extra money,” Uber told The Gleaner in an emailed response on Wednesday evening.

When contacted by The Gleaner on Wednesday, vice-president of insurance operations, Byron Leslie, said Guardian was bound by a non-disclosure agreement.

But that legalistic defence offers no comfort for Samuels, who said consumer rights must be preserved with transparency.

“If the consumer is going to use the product, the consumer must know what he is getting into when he enters one of those cars.

“... We have an idea of local insurance, but we are not clear” on the arrangement with Guardian, added Samuels.

Jamaica’s Transport Authority issued a veiled threat on Wednesday, suggesting that the uncharted territory of may not eliminate the need for Uber to partner only with licensed public-transportation operators.

That missive may be read as an early strike to the newbie, which has enlisted thousands of owners of private motor vehicles in more than 10,000 cities in 69 countries.

The regulator, which said it has met with Uber twice before, disclosed on Wednesday that “any attempt to circumvent the provisions of the law will be taken as intent to operate illegally and not in the interest of good order or safety”.

It appeared to cast scrutiny over Uber’s claim of a leasing agreement, saying that “the provision of public-transportation services, irrespective of the terminology used, once deemed functionally as such, requires a road licence from the Authority”.

Wayne Buchanan, manager of El Shaddai taxi service, has warned that the embrace of Uber might spark an exodus from the formal red-plate system if licensed drivers are wooed to operate their vehicles privately or as ‘robots’, which would cause the Transport Authority to lose tens of millions of dollars in fees.

Buchanan said that Uber’s model will result in a “whole heap of illegal taxis on the road”.

“What I have heard is that persons are watching to see what is going on and then after that, all of these road licences will be surrendered. It’s going to start a massive problem,” he told The Gleaner.

“From somebody know that they can use white plate, green plate, or any plate to operate, insurance is going to go out of business.”

Compared to Uber’s per-trip bounty for drivers – which may see operators claiming 75 per cent of fares per trip – El Shaddai charges drivers a base fee of $3,000 weekly.

Shawn, a taxi driver in Half-Way Tree, said that he would be willing to enrol with the ride-sharing service as a driver but under certain circumstances.

“Only if mi can go round the Transport Authority ‘cause it nuh mek sense mi a pay road licence and all these fees and mi can sign up wid Uber and do the same thing.

“The Transport Authority is going to be the loser in the end if everybody decide to go to Uber,” said Shawn.

“If Uber come in and we don’t have to pay all of those fees, a more money inna we pocket.”

Route taxi driver Milton said he was primarily worried about the income he would lose from charters while another operator named Howard is fearful that private vehicle owners will crowd out the market.

“It would be totally unfair to the people who are paying their money to get a road licence to operate their vehicle on the road. If Uber doesn’t get the approval from the Transport Authority or the Government, dem illegal and should not be allowed to run in the system and take away revenue from people who are paying their money to the Government,” Howard, a taxi operator for 20 years, bemoaned.

However, Percival Prince, who drives a route taxi as a second job, said he would be willing to use the ride-sharing company as both a driver and passenger. He does not believe that current taxi operators have much to lose from Uber’s entry into the sector.