Health services being upgraded as St Thomas readies for take-off 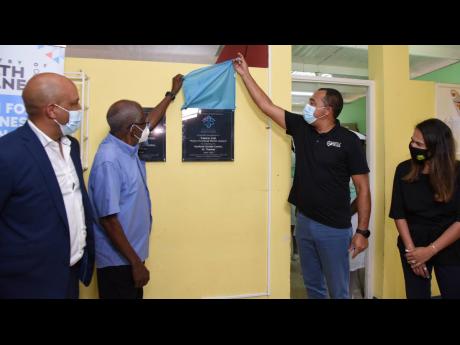 Kenyon Hemans/Photographer
Minister of Health and Wellness Dr Christopher Tufton (third left) unveils a plaque marking the adoption of the Seaforth Health Centre in St Thomas with Norman McDonald, chairman and CEO of Canco Limited, yesterday. At left is St Thomas Western Member of Parliament James Robertson, while Lisa D’Oyen, executive director of Seprod Foundation, looks on. The centre is being adopted by Canco Limited and the Seprod Foundation.

An extensive redevelopment plan is in the works for the St Thomas Health Services as it braces for mass migration as a result of significant investments being made in the eastern parish.

This was disclosed yesterday by Health and Wellness Minister Dr Christopher Tufton during an Adopt a Clinic ceremony at the Seaforth Health Centre in St Thomas, which has been adopted by neighbouring businesses Canco Limited, which trades under the Linstead Market banner, and the Seprod Foundation.

“There is a plan for the expansion of services in these parts,, in recognition of the numbers and the anticipated growth – plans now looking at environmental health, dental services, health records, clinical assessment and an improvement in client services. So there is more to come,” Tufton said. “The Princess Margaret Hospital has benefited from expansion … . Now, it’s time to build out around the hospital through the health centres, and there is a plan.”

A St Thomas health official told The Gleaner that the first draft of the redevelopment plan of the parish’s health services – expected to include the expansion of services in some facilities, enlargement of buildings, additional staffing and equipment – has been prepared and that the necessary stakeholders will be engaged in short order.

It is expected that the expansion will be done in tandem with other developments in St Thomas and in anticipation of persons moving into the parish once these improvements are executed.

“A draft redevelopment plan has been done because we are looking at persons coming into the parish to live and retire, as we will be having the Southern Coastal Highway Improvement Project and the Morant Bay Urban Centre at Goodyear Oval,” the official, who did not want to be named, said. “Tourism development is also slated for the parish. So, with those, we will need to have healthcare services being expanded to facilitate the expected increase in the population.”

Meanwhile, Tufton expressed thanks to Seprod and Canco for adopting the Seaforth Health Centre.

“We recognise the importance of healthcare and we encourage you, the community, to use the facility and benefit from the generosity of these entities and to see primary healthcare as part of you,” he said.

Situated on Wyatt Road in the community, the health centre is the central facility for the Trinityville Health District, which has approximately 30,000 residents. It provides oral health, dressing, family health, curative and environmental health, vector control and pharmacy services. It caters to in excess of 1,300 patients per month.

The adoption promises an investment of $6 million from the foster companies over the next three years, to improve the facility.

St Thomas Western Member of Parliament James Robertson lauded Canco and the Seprod Foundation for their reinvestment into the parish, describing the venture as a game-changer for the residents served by the centre.