After saving daughter with kidney, father clings to hope for ailing wife 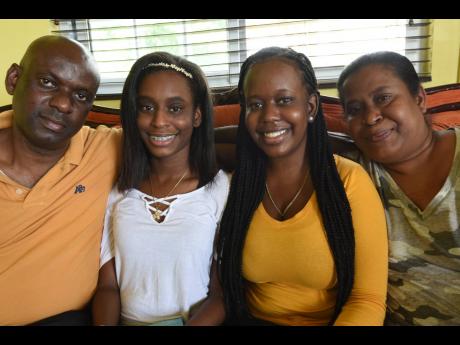 Ian Allen/Photographer
Dane McKay is seen here with daughters Kelsy (second left) and Kadane and wife Karen. Dane donated a kidney to save Kadane from life-threatening renal failure in 2019 and is seeking support for his wife, who has Cushing’s disease, breast cancer, and other non-communicable illnesses. They have launched a GoFundMe account.

As Dane McKay celebrated Father’s Day on Sunday, he did so with a sense of satisfaction that he gave his first daughter, Kadane, a second shot at life.

In 2019, a few days before the traditional celebration on the third Sunday in June, Father’s Day in 2019, Dane donated one of his kidneys to Kadane, who had fallen ill with renal failure.

Kadane, now 20, had been on medication and underwent a gruelling test of wills with dialysis three times per week for two years, commencing in 2017.

“When the blood type came back a match, I got so emotional to the point of tears,” he said. “It wasn’t a choice; I had to do it,” he said, fighting to hold back his tears.

The transplant was successful.

Kadane had to stay in the hospital for almost three weeks and Dane was admitted for close to two months because of complications.

“We were emotionally drained, financially drained. It was very challenging, to say the least,” said the 47-year-old owner of Alkane Company Limited, a small construction company.

Within a year of the transplant, the McKays’ Red Hills, St Andrew, household was shaken when Karen, Dane’s wife of 22 years and the mother of their three children, sought medical advice because of excessive weight gain.

They had been rattled earlier when Karen tested to see if her kidney was a match for her daughter’s. Karen was hit with diagnoses of hypertension, diabetes, and high cholesterol.

As she tried to adjust her lifestyle, things continued going haywire.

Karen, 51, was diagnosed with Cushing disease and was advised to seek medical attention at the National Institute of Health in the United States. She also has a tumour on her brain.

Cushing disease causes a non-cancerous tumour on the pituitary gland that triggers overproduction of cortisol by the adrenal glands, which are located above the kidneys. The upshot: hormonal imbalance.

“When I went up and I did the test, it showed that it was the tumour on the brain that was not the problem. It was another tumour on the adrenal gland on top of the kidney,” Karen told The Gleaner.

A week before that surgery, the family matriarch was hit by another gut-wrenching diagnosis: Stage Four breast cancer.

Karen removed the tumour from the adrenal gland and started chemotherapy for the lump in her breast in May 2021. The tumour in the brain is being closely supervised.

“Since we came back, I haven’t been able to do any treatment because of the cost of the drugs here,” she said, explaining that she had missed her first appointment.

A single treatment, the family said, could cost about $4.2 million per month – spurring Kadane and her 14-year-old sister Kelsy to start a GoFundMe account ( https://www.gofundme.com/f/support-for-the-mckay-family).

With the dialysis, medication, hospital bills, a kidney transplant, and Karen’s health deteriorating, Dane said he has lost track of how much money the family has spent so far.

The McKays are very thankful to their family and their church, New Life Ministries, for standing by them and providing emotional and financial support where they can.

Dane said that the McKays’ harrowing experience with illness has brought the family closer to God, praising their church, New Life Ministries, for providing emotional and financial support.

The dad boasted that Kadane has gained around 14lb since the transplant and has secured Caribbean Secondary Education Certificate exam passes after repeating grade 11 at Meadowbrook High School twice. She has been accepted by the University of Technology, Jamaica to read for a degree in business administration.

“We are not seeing the way forward in terms of even the school fee or medication bills, but because God came through for us on different occasions, we are holding to the assurance that He will come through for us,” Dane said.

For Father’s Day, Dane said that being with his family – including 26-year-old son Trayvone – continues to inspire him.

“I just appreciate my husband every day. For the last couple of months since I found out about this, he has been a tower of strength, and I thank God every day for him, and I am just praying for his strength,” Karen said, in tears.