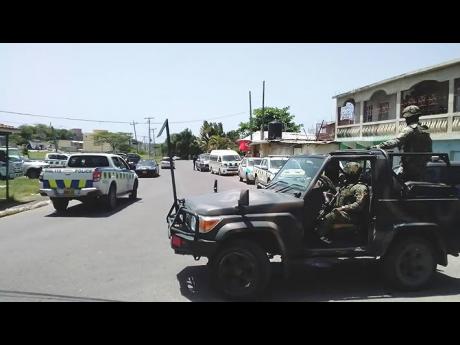 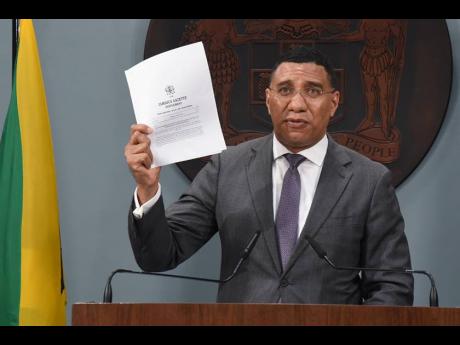 While waiting for its day in court challenging a Supreme Court ruling that detentions under states of emergency were in breach of the Constitution, the Andrew Holness administration has signalled that work is well advanced on new legislation to provide the security forces with the arsenal for tackling violent crime.

Prime Minister Holness told journalists on Sunday that his administration would put in place “a better scheme of arrangements that are clarified and clearer in keeping with the Constitution of Jamaica”.

He said the Emergency Security Measures Act (ESMA) was now in the development process and would be introduced in Parliament at a later date.

However, Holness said that his Government was not abandoning the use of states of emergency if the need arose.

He argued that if a situation occurred where there was threat to life, community, and property that satisfied the constitutional requirements, the Government would trigger the security order.

“The declaration of one still remains an option for the Government. We have never closed that option,” the prime minister said during a Jamaica House press conference to declare a zone of special operations in Norwood, St James.

Holness said that the issue of contention might be extending a state of emergency beyond the initial 14-day period.

A two-thirds majority is needed in the bicameral Parliament to extend a state of public emergency, muscle that the prime minister has with 48 Labour-aligned representatives in the 63-seat Lower House. Holness would need one of the eight opposition senators to side with the Government in the 21-member Upper House.

In September last year, the Supreme Court struck down states of emergency as unconstitutional in a habeas corpus case brought by five men who, at the time of their affidavits, had been detained for between 177 and 431 days.

The Government filed an appeal on October 29, 2020, and it appears that its legal team is eager to present its challenge to the ruling.

“It is my hope that the transcripts will be prepared soonest so that we can have the matter heard. We have signalled that we want the matter to be heard expeditiously,” said Attorney General Marlene Malahoo Forte.

She told journalists on Sunday that exciting questions of constitutional, procedural, and administrative law would be discussed in the cases that were now before the courts.

“I bemoan the fact that we are awaiting the transcripts even though we have signalled that we would like the matter to be considered expeditiously given the criticality of the measure to the State and what is happening in Jamaica,” the attorney general said.

“But we look forward to getting the guidance of the court. We look forward to presenting our perspective of the law in keeping with our understanding of the Charter (of Fundamental Rights and Freedoms) and, of course, the imperative of the State and of governance,” she asserted.

Meanwhile, the ZOSO declared in Norwood on Sunday came against the background of 15 murders and 14 shootings since January 1 in the community spanning one square kilometre.

As the security forces moved in early Sunday morning, the Police High Command and the military were focused on dismantling six gangs that Commissioner of Police Major General Antony Anderson said havew been living off the proceeds of lottery scamming, contract killings, extortion, and funding from their cronies abroad.

Anderson told Sunday’s press conference that 66 murders had occurred in Norwood since 2019.

He also reported that since January this year, 79 murders have been recorded in the St James Police Division, representing a 25 per cent increase over the corresponding period last year.

Anderson said that Norwood accounted for the most murders and shootings in the parish.

“Our investigations have shown that there are other murders and shootings that take place outside of the designated area that are caused by the six gangs that operate in the Norwood area,” the commissioner added.

Holness told journalists that the ZOSO in Norwood would bring peace to residents and provide an opportunity for the community to experience a new beginning.

“The overall intention in declaring an additional community in St James as a zone of special operations is to ensure that we can deliver the social intervention, leading to an improved living condition and quality of life for the citizens in that area,” the prime minister said.

Jamaica has recorded a three per cent rise in murders, year-on-year, with 653 killings up to June 18. That is 21 more than for the corresponding period in 2020.