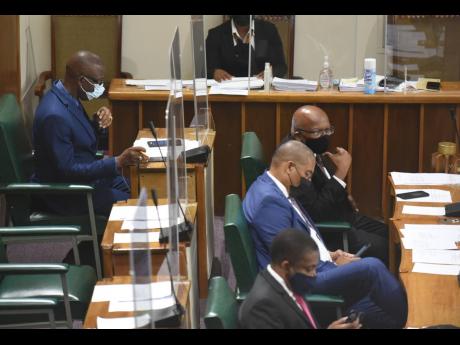 Kenyon Hemans/Photographer
Westmoreland Central MP George Wright is relegated to the back benches of the Opposition, which disapproved of his presence among them on Tuesday. 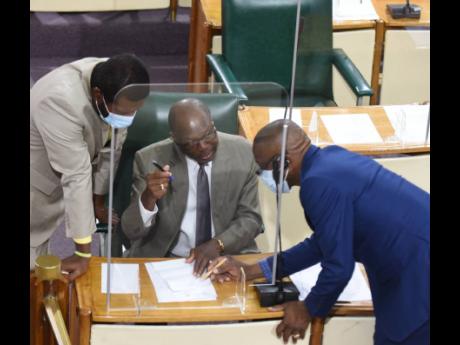 Kenyon Hemans/Photographer
Back with his pals: Westmoreland Central Member of Parliament George Wright (right) has a tête-à-tête with old Labour Party chums Everald Warmington (centre) and Daniel Lawrence. Wright was scorned as he sat with the Opposition, getting sympathy only from Denise Daley, the MP for St Catherine Eastern.
1
2

“There is a stranger on this side of the House.”

That pronouncement by a seemingly irritated Leader of Opposition Business Anthony Hylton was quickly shut down by Speaker of the House Marisa Dalrymple Philibert on Tuesday, triggering another round of intense debate over George Wright, a government-turned-independent member of parliament who now occupies a seat at the rear of the Opposition benches.

Prime Minister Andrew Holness was introduced to make a statement when Hylton sought the Speaker’s attention to express his displeasure with Wright seated on the Opposition side.

Leader of Government Business Edmund Bartlett joined the fray as he sought to castigate Hylton for his remarks, accusing him of trying to create “media sensation”.

“Everybody who is on that side is part of the Opposition, so there is no stranger in the House,” Bartlett insisted.

Dalrymple Philibert said that if a stranger were among lawmakers, the marshal to the Houses of Parliament would eject him from the chamber.

“I have looked in this Parliament and I am not blind. There are no strangers,” the Speaker charged.

Wright, who represents the Westmoreland Central constituency, has been embroiled in an April assault scandal after accusations that he was the man seen battering a woman with his fists and a stool. He has neither confirmed nor denied the claim.

Hylton’s attempts to address the Speaker fell on deaf ears as Dalrymple Philibert said her ruling was that Holness should proceed with his statement.

However, later during the sitting, Opposition Leader Mark Golding resurrected the issue, saying he was disappointed with Dalrymple Philibert’s handling of the matter.

The opposition leader did not mince words, declaring that Wright “is not welcome among us” and that he “has no place on this side – none”.

Golding said that while he was tempted to demonstrate his angst by walking out of the chamber, he decided against it because the gesture would have been short-lived seeing that the Opposition had no plans to exclude themselves from the process.

With a chorus of heckling from the Government benches, Golding hit back: “We have a lot of empty barrels in here that make a lot of noise.”

He said that there was no rule that stated that Wright should be on the Opposition side, noting that it was in the Speaker’s judgment to determine his seating.

“I feel your discretion was flawed and has put us in an invidious position,” he said.