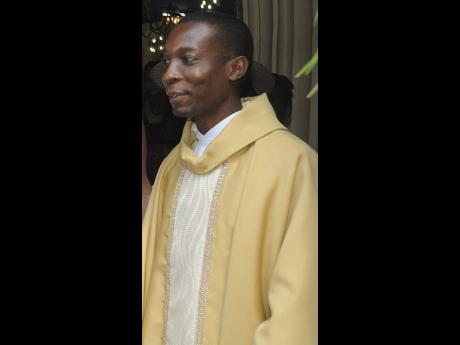 The murder of an Anglican priest in May Pen, Clarendon, last year has dealt a crushing blow to his family, especially his father, who is not only struggling to find the will to continue, but has also lost interest in pleasures of the flesh.

Reverend Father Larius Lewis, 38, was killed on September 23 at his official residence by two men he had met on a dating site and had invited to his home.

The clergyman was knocked unconscious in the head with a table and his hands and feet bound. When he regained consciousness, he was then left with a plastic bag around his head, still bound, during an argument with the men.

His two killers – 23-year-old Lloyd Thompson and 20-year-old Tafari Wilson – were both sentenced to life in prison on Thursday in the Clarendon Home Circuit Court and will have to serve 19 and 21 years, respectively, before becoming eligible for parole.

During the sentencing hearing on Thursday, an angry Ainsley Lewis, 59, shared that he still cries when he reminisced on the wonderful time he had with his son, and detailed how his son’s untimely demise has affected his family.

“Since Larius has died, our family has been faced with tremendous hardships both financially and emotionally,” said the elder Lewis. “His death has affected me so badly that I have not been sexually involved with Novelette [Thompson] since. I just don’t have the desire for sex since.”

The elder Lewis, who has not worked for the past eight years because of an enlarged prostate, which causes pain when he works, said his son had been the head of the family and main breadwinner.

“Because I am unable to work to provide for myself and my family, Larius takes care of his mother Novelette and me by providing food, paying our bills and my medical expenses. He also takes full responsibility for his younger brother,” he added.

According to the still-grieving father, the family’s standard of living has fallen significantly since his son’s murder.

The elder Lewis explained that his youngest son, who had been attending a preparatory school, had to be transferred to a primary school as the family is unable to find the $40,000 per term fee.

“Our yard is now overgrown with bushes and it is not because we are lazy, but I honestly don’t even have the drive or energy to get up and try to clean it up or the money to pay for it to be cut,” he expressed.

The heartbroken St Elizabeth labourer, who had spent his life savings on Larius’ education, said that the minister was more than just his son or the head of the household, as he was also a community leader, who was greatly respected and admired.

“He was a good leader. That was his God-given gift, and he was a strict person whom everyone respected and we depended so much on,” he told the judge.

The senior Lewis said that he still cries when he remembers some of their fond memories and the plans he had that can no longer be fulfilled.

“Words can’t express how angry I am with the men who killed my son and I have not forgiven them. I wish the Government would turn them over to me so I can get the justice that I really want,” he told the court.

Thompson and Wilson were arrested in January after they gave caution statements confirming their presence at the murder scene.

Both men confessed that they were friends and were meeting Larius for the first time.

Following the attack on the priest, they stole his television, computer, cash, cellular phones, and other items.

They also took his vehicle, which was found completely scrapped in Kingston the day after the incident.