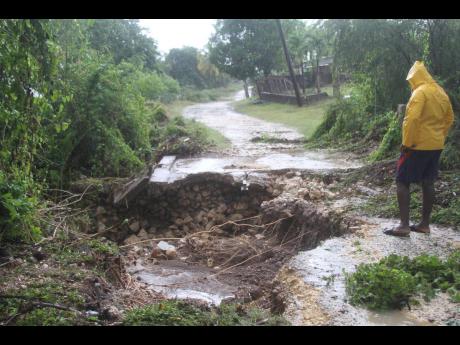 Nathaniel Stewart/Photographer
Denzil Hill of Gimme-Me-Bit surveys a collapsed road in the Clarendon community. He blamed the disaster on an unmaintained waterway.

As 74-year-old Denzil Hill erected sticks at a breakaway across from the Gimme-Me-Bit Primary and Infant School in Clarendon on Sunday, he did so with resignation that it could have been avoided.

The road gave way to the ravages of rain from Tropical Storm Elsa, which also caused a bridge located 300 metres away leading to the community cemetery to crumble under the impact of flooding.

Hill charged that the authorities have not properly maintained the gully for more than 40 years.

“If the gully did clean, we wouldn’t have this breakaway, ‘cause the water would keep moving,” he told The Gleaner.

The waterway has unearthed woes, too, for 77-year-old Dorette Coleman and her family.

Coleman said she had to depend on her daughter’s support to cross murky waters to get food at a nearby shop.

“Me haffi hold on pan har fi walk ‘cause the water just have me a fling me two side, and tru the foot dem nuh so good,” she said, recounting Sunday’s traumatic experience.

Coleman’s daughter, Claudia Pinnock, shared that she had relocated the younger children in her home because the dilapidated one-bedroom structure stood little chance if Tropical Storm Elsa brought driving wind and rain.

Her home - including her bed - was drenched on Sunday.

“The gully is very dangerous ‘cause it just a push. A the first me see it come so far,” said Pinnock, who has lived in Gimme-Me-Bit for more than four decades.

Lothan Cousins, member of parliament for Clarendon South Western, said that he had received reports of severe infrastructural damage in Gimme-Me-Bit. He theorised that the drainage systems were no match for the volume and velocity of water that swept through the community.

Cousins said that discussions on repairs were already under way.

“I spoke with the minister who has responsibility for road and works, and he’s fully aware of the impact and has committed to do what is necessary to effect whatever repairs he can,” said Cousins.