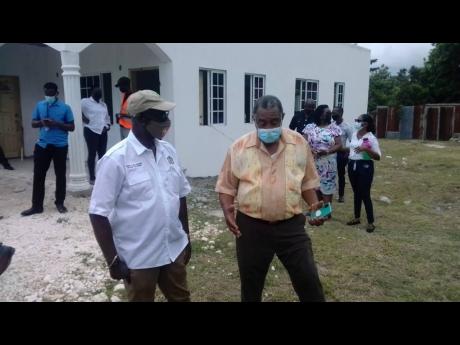 Local Government Minister Desmond McKenzie got in a fit of rage during his tour of Westmoreland on Thursday after discovering that a matron’s quarters and male ward at the Savanna-la-Mar Infirmary were still incomplete despite funding being granted four years ago.

“I am very very dissatisfied, unhappy, vexed, and mad with the situation here,” said McKenzie, who urged Mayor Bertel Moore “to step up to the plate” and complete the project.

“From 2017 this a gwaan! Damn foolishness! And until now it cah finish.”

McKenzie said that funds were made available for the construction of a new matron’s quarters following a tour he did with the Savanna-la-Mar mayor in 2017.

The building was not fit for habitation, the local government minister said.

Approximately $42 million was disbursed in addition to funds provided by the National Housing Trust.

“Manchester has built three brand-new buildings and has completed, Portland has build two, St Elizabeth has done theirs, and all the other infirmaries that have benefited under the rehabilitation programme have completed their projects on time and within budget,” said McKenzie.

Responding to McKenzie’s outburst, Moore told journalists that he was just as frustrated as the minister.

“I blamed this totally on our superintendent. I said to her more than once that we must work on both buildings at the same time,” said Moore.

“She does not budge, so she is the one that I put the blame on. I am tired of talking to her concerning it, and we will have to do something.”

Nadeen Collins-Whyte, the temporary matron at the infirmary, said the facility was currently overcrowded.