A child shall lead them 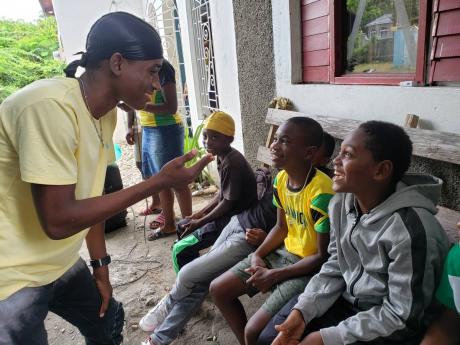 Photo by Shanna Monteith
Jaheim Brown, 16, raps with one of the 28 students enrolled in his summer school programme in Yallahs, St Thomas. Students aged four to 23 attend the sessions. 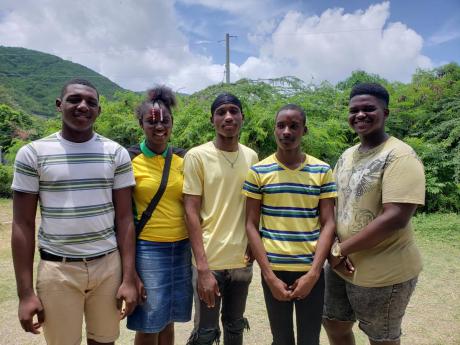 With a genuine passion for kids and a hope to one day become a teacher, 16-year-old Jaheim Brown of Yallahs, St Thomas, has opened the gates of his home to children of the community, hosting them as part of his summer school programme. Perched on...

With a genuine passion for kids and a hope to one day become a teacher, 16-year-old Jaheim Brown of Yallahs, St Thomas, has opened the gates of his home to children of the community, hosting them as part of his summer school programme.

Perched on old furniture under a tree, children decked in black, green, and yellow could be seen joyfully participating in activities last Thursday.

Jaheim, who had just led his students in prayer for the success of the day’s proceedings, shared that they were celebrating their depiction of Jamaica Day.

“Everyone is ready to participate in the activities that we will be having today, some of which include cultural performances and the Paul Bogle March. The children will also learn about culture, the history of Jamaica, including all the heroes,” he told The Gleaner.

Jaheim shared that the idea of hosting summer classes in his yard germinated with him and his cousin three summers ago.

“It was in June 2018 when my cousin and I were hanging out and some students in our neighbourhood asked us to help them with their schoolwork, and from that day we realised we could offer help to others, so we started the summer school programme and invited children from our community who needed additional help with their learning skills,” he said.

The programme’s scope focuses on the three Rs: reading, writing, and arithmetic.

Jaheim said that he feels a sense of achievement at the progress that the youngsters have made.

“We have students who were struggling to read that are really improving, and we also have students who normally score seven out of 20 in certain areas and are now getting 14 out of 20, and that’s a big difference,” the 16-year-old said.

Jaheim’s community-focused drive mirrors one of the gems unearthed during the coronavirus pandemic: the voluntarism of schoolboy Kelvin Peart in Queenhythe, St Ann, who transformed an old bar into a makeshift schoolroom where he has tutored children while he himself attends online classes.

Angelette Martin, a resident of Yallahs, has commended Jaheim’s initiative, adding that she was wowed by the positive energy displayed daily.

Both of her sons are involved in the community summer school - the elder boy assists with teaching while the younger lad is a student.

Martin said she passes by every day to help oversee proceedings and is impressed by the success rate.

“I really see where people have been learning because my son doesn’t really like school, and I see where he puts out the interest to come this summer school every day and there is no idling here,” she said.

“It’s a good thing for the community because most of the kids, they don’t really get the learning they need in school. Some of them are not so quick, and when they are here, the teachers spend more time with them, explaining to them what they don’t understand or know.”

Martin added that other parents have expressed their gratitude for the summer school programme and has overheard others in the community considering sending their children to participate.

“Parents actually feel safe to allow their children to come because Jaheim is a Christian, and it’s a Christian home, and he raps well with the children in the community,” said Martin.

Though pleased with the progress they have been making, Jaheim admitted that it has not been a bed of roses.

“I really love doing it, but to be honest, sometimes it is really difficult and stressful. We don’t have good seats, a good board to teach on, nor tarpaulin to cover the children under. I don’t have the resources to provide lunch for them either, and sometimes there are those who don’t carry lunch or money to buy, but we make every effort to ensure that they are well taken care of,” he said.

Students are charged $100 per day to offset expenses and to provide a stipend for the teen assistants. Children who cannot afford it are not turned away, Jaheim said.

This year’s programme is scheduled to end on July 30.