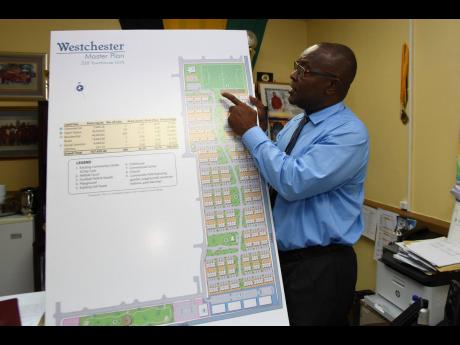 West Indies Home Contractors’ (WIHCON) plan to build 328 town houses on lands in Westchester, Portmore, will not trigger the eviction of businesses and a church that occupy the property. Concerns have lingered since WIHCON’s announcement of the...

West Indies Home Contractors’ (WIHCON) plan to build 328 town houses on lands in Westchester, Portmore, will not trigger the eviction of businesses and a church that occupy the property.

Concerns have lingered since WIHCON’s announcement of the multimillion-dollar investment, but Portmore Mayor Leon Thomas sought to calm fears with a revelation that a negotiated settlement has been reached between the developers and the municipal corporation.

WIHCON has agreed to lands close to the canal being developed for the siting of a garage, a woodwork factory, a welding shop, a church, and other businesses that have been operating on the property for many years.

“The garage operator, in particular, has been doing business at that location for a number of years now, and along with the woodwork and welding shops would find it hard to relocate,” Thomas told The Gleaner on Tuesday.

“What the council has promised the developers when they agreed to give us the authority to manage the 20 lots that these businesses will occupy is that we transform them into apprenticeship training facilities with certification by HEART/TNSTA Trust to cater to the many unskilled young people in and around the Westchester community,” the mayor further disclosed.

According to him, the municipal council has requested that the land be prepared before it is handed over, a condition to which WIHCON has reportedly agreed.

Supporting infrastructure such as sewerage, water, and electricity will be installed before being handed over.

Business owners have indicated that they have no problem working with the municipal council’s plans for the area.

Newton Griffiths, who owns and operates Newton’s Auto Repair garage, has run his business on the property for more than 20 years. He said it would be very difficult for him to relocate elsewhere and is happy that an agreement has been reached.

“I have no problem transforming my business into a training ground. In fact, over the years, I have trained many persons, so this is just taking it to another level where they will now be certified by HEART,” he said.

Griffiths said that other business owners were supportive of the new thrust towards training for youths in the area.

And while the initiative is being fine-tuned, the mayor disclosed that there are growing concerns about the increase in gun violence in sections of the municipality.

“We have a number of other businesses that have indicated their desire to invest in Portmore, so we have to get this shooting spree under control,” he said.

“It is our understanding that the majority of the shootings are gang related, while some are triggered by family feuds concentrated in certain communities.”

Thomas said that the municipal corporation has initiated a mediation strategy that incorporates the ministers’ fraternal, the police, and justices of the peace.

“We will be focusing on the family and see how they can assist with reaching family members who are involved in violence,” the mayor said.