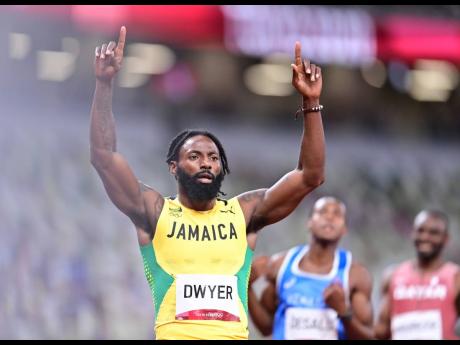 Jamaican sprinter Rasheed Dwyer says he is looking to deliver a strong performance in the men’s 200 metres final at the Tokyo 2020 Olympic Games, after booking a somewhat surprising qualification, which he has dedicated to his coach, Maurice Wilson.

Dwyer advanced to the final of the men’s 200m after finishing second in his semi-final on Tuesday with a season’s best 20.13 seconds, which was also his fastest time since 2017.

“For me in the final, any card can play. I just need to go there and be confident in my work and try to pull off a medal or even a personal best, or a season’s best, or something,” said Dwyer.

It was tremendous progress and a small miracle for Dwyer, who has endured a challenging year, which includes injuries to his spine, ankle, and hamstring, and very limited time on the track itself during his preparation and build-up to the championship.

“This is a very good feeling. I’ve been working towards this basically for all of my life professionally. So I feel really good right now,” said Dwyer, the 2014 Commonwealth Games champion.

Dwyer has had to undergo pool therapy alongside clubmate Demish Gaye, who fractured his ankle.

A suspected case of “very bad” scoliosis has also presented other challenges.

Dwyer, who has a personal best of 19.80 seconds, which he achieved in 2015, says he is looking to do something special for his Sprintec coach Wilson, who he described as a father figure.

“Despite all the challenges I faced this year, my coach got me ready for Trials and here. I’ve made the finals, so I’m very happy with this,” he said.

“I am really thrilled, but in truth this is actually not for myself. I’m not going to say that it’s not for Jamaica. But it is definitely for my coach.”

Though the men have not snatched any medals in Tokyo, Dwyer is optimistic about the future of male sprinting.

“Jamaican sprinting hasn’t gone anywhere because we have some really good kids coming up like Oblique Seville, Michael Stephens, and others. ... They just need to be nurtured,” he said.