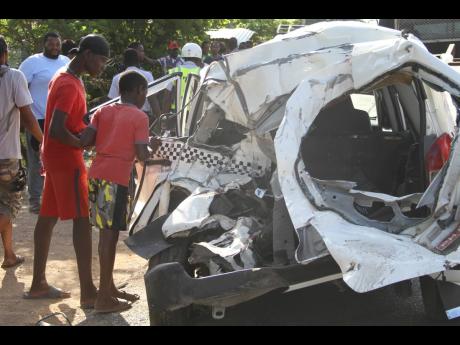 Nathaniel Stewart
Two youngsters look intently inside a Toyota Probox motorcar that was involved in an accident along the Toll Gate main road in Clarendon yesterday. One man died as a result of the crash. Two persons are in critical condition in hospital.

The Clarendon police have confirmed that one man died as a result of injuries sustained in an accident in the community of Race Course in Toll Gate, Clarendon, yesterday afternoon.

Ramone Henry, an eyewitness, told The Gleaner that overtaking contributed to the crash involving a Nissan Tiida motor car, a taxi, and a truck that was parked along the roadway.

“The Tiida was overtaking and touch the side of the next car and it just spin and drop in front the truck,” he said.

The Gleaner understands that another truck was used to pull the taxi from under the parked truck.

Henry said he was assisted in removing occupants who were trapped, and were later transported to hospital. It is reported that at least two people are in critical condition.

The Toll Gate main road is listed as a crash hotspot by the Road Safety Unit.

Councillor for the York Town division, Uphell Purcell, said motorists should exercise caution on that leg of the road.

Purcell also encouraged drivers to reduce their speed while on the nation’s roads.