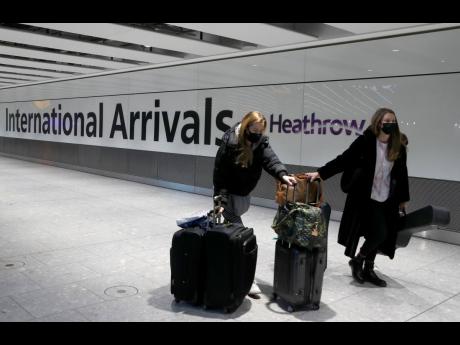 AP
In this January 17, 2021 photo, travellers arrive at Heathrow Airport in London. Fuelled by a third wave of COVID-19, 'red list' designation for Jamaica could send tourism fortunes tanking again.

Jamaica’s favoured position in travel and tourism will be heavily weighted on the success of its vaccination campaign, the country’s minister of tourism, Edmund Bartlett, has said.

Bartlett was responding to news that Jamaica’s third-largest source market, the United Kingdom, may place the island on its red list, in addition to two other Caribbean countries, St Lucia and Dominica.

In June, the UK introduced a traffic light system, ‘green watchlist’ and travel certification, which saw travellers categorised in green, amber or red, depending on the destinations they visit.

Travellers returning from red countries are placed under greater restrictions, including 10-day quarantines. The system was among the recommendations from a UK task force.

“We, as a destination, have to overcome this virus. It is a problem with all of us. Some are doing better than others, but Jamaica’s work has taken on new and added importance, and it is the responsibility of all of us is to ensure we adhere to the protocols and take the vaccination,” the tourism minister said.

Tourism workers who have been hesitant about taking the vaccine will be targeted through a special islandwide vaccination effort being sponsored by the Tourism Enhancement Fund (TEF).

Two vaccination units are being prepared by the TEF.

If Jamaica is red-listed, persons returning to the UK after visiting the island will be required to pay 2,000 pounds to quarantine in a hotel.

A Jamaican travelling from Gatwick Airport in London wrote on the popular social platform Facebook on Wednesday that in the 30 years she has been travelling to Jamaica, she has never seen the queue at the airport so empty.

The Jamaican woman also posted a photo of the airport devoid of passengers.

Jamaica is currently on the amber list, along with Finland, Denmark, China, the British Virgin Islands, Belize, The Bahamas, Aruba, Canada, and Belgium.

Approximately 140,000 people, or five per cent of the population, are fully vaccinated, but a four-day weekend blitz has driven the number of first-dose recipients to almost 490,000.

The country tallied a one-day record of 21,000 shots on Tuesday.