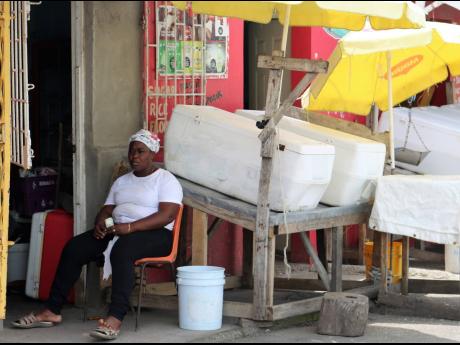 Photo by Christopher Serju
Fish vendor Maureen McDermott ponders her next move while sitting at her stall at the Rae Town Fishing Village in Kingston on Wednesday. Having dumped about 50lb of fish that was spoilt over the second three-day lockdown, she is hesitant about making investments amid low customer turnout.

Healthcare and business leaders have welcomed the extension of no-movement days for another two weeks, saying the lockdowns were crucial to restricting the spread of the highly contagious coronavirus.

Prime Minister Andrew Holness made the disclosure late Wednesday after a whistle-stop tour of St Thomas, where he sought to gin up vaccination in a parish with reported high levels of hesitancy and suspicion.

In announcing the new measures at a Jamaica House press conference, Holness said that more focus must be given towards investing in the country’s health sector.

Hospitals have reported overcapacity admissions and stifling shortages of oxygen, supplies of which are lifesavers for the respiratory illness.

Harrowing images of patients lying on mattresses on hospital floors and patients hooked up to oxygen tanks in tents have painted a changing picture of the Government’s management of the crisis.

“The truth is we have underinvested for decades, for generations, in health. The pandemic is showing that up, it is testing it, and the Government has to think about that very carefully now how we build a robust and resilient health infrastructure,” said Holness.

The latest lockdown announcement comes near the end of the previous seven no-movement days, which were held on August 22-24 and 29-31 and which would have concluded on September 5.

Medical Association of Jamaica President Dr Andrew Manning said that the extension of the no-movement days came as no surprise because of record daily reports of infections, hospitalisations, and deaths in August. An all-time daily high of 31 deaths, spanning August 23-30, were recorded on Tuesday.

“Something needs to be done to bring down the number of new cases, and certainly, the extension of the no-movement days is something that has worked for us in the past,” Manning told The Gleaner.

“What we have to look for and what we hope to see is a decrease in the positivity rate and in the number of new cases,” Manning added.

The globally accepted benchmark of coronavirus positivity is five per cent, but infections have trended as high as 10 times that bar.

Jamaica Medical Doctors Association Dr Mindi Fitz-Henley urged Jamaicans to adhere to the ongoing recommendations for slowing the spread of COVID-19, for which 68,482 infections have been recorded as at Tuesday.

Fitz-Henley said that her association backed the prime minister’s decision.

“Now is not the time to be letting up, to be enjoying dinner parties and fraternising with persons unnecessarily,” said Fitz-Henley. “Now is the time for you to be focused and very clear on what our task is, which right now is ensuring that we can bring the country out of this pandemic.”

John Mahfood, president of the Jamaica Manufacturers and Exporters Association, acknowledged that the expanded lockdowns – from September 5 to 7 and again from September 12-14 – could be detrimental to the economy but said that the prime minister had no alternative.

“We realise the situation is very difficult for the economy and for the people, and Jamaica being as poor as it is, it is difficult to lock everything down for an extended period of two or three weeks because there are so many Jamaicans that are living from day to day on remittances and having to go to the store frequently,” Mahfood said.

“I think this was a compromise situation where he [Holness] is continuing to keep a lid on things, and I think it is reasonable in the scheme of things.”

Daily curfews will be observed from 7 p.m. to 5 a.m. on Wednesdays, Thursdays, and Fridays. On Saturdays, the curfew will commence at 6 p.m. and be lifted on the following Wednesday at 5 a.m.