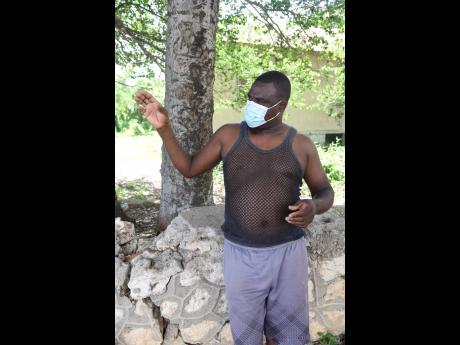 The lone survivor of Monday’s septic tank triple tragedy at Moneague College can scarcely believe that he is alive.

The painful images from the brush with death still flash across the mind of 38-year-old Rayon Reid.

Kirk Kerr, 46, spun dizzily in the toxic death trap, fell, and hit his head. Joslyn Henry, too, crumpled to the floor, the poison causing him to gasp in despair.

Hands on his head and sighing deeply with relief, Reid was still a shadow of himself as he spoke to journalists at his Monk Street, Spanish Town, home in the company of his family Tuesday.

“Mi can’t sleep a night. Every time mi try fi lock mi eye, me a see back Panka (Joslyn). Mi a look pon Panka a gap (gasp) inna the place and me can’t help him.”

Reid, on realising that the men were struggling to maintain consciousness, had to be assisted to safety.

“When mi a go fi tek up Panka, the gas lick me and the next bredrin name Charles come down and him a say, ‘No, man, da gas ya wicked,’ said Reid of his rescue out the hole.

Millicent Henry, Joslyn’s wife, said that she was uncertain about his exact destination as he left for work Monday morning.

Their last conversation surrounded one of their sons joining him on the trip to St Ann, but she is glad that that plan did not manifest.

“It’s a blow to everybody yah now. He was a good man, loving, hard-working. I know him for over 30 years,” said Millicent, who shares five children with Joslyn.

Henry hailed from Rivoli, Spanish Town, while Kerr resided in nearby Shelter Rock.