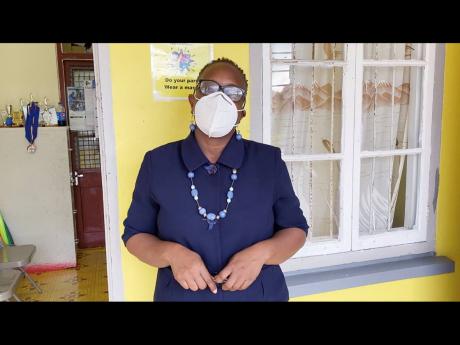 Photo by Ainsworth Morris
Nadienne Crossman, principal of the Mount Peto Primary School in Hanover, says that most of the parents of students at her school are now out of work. 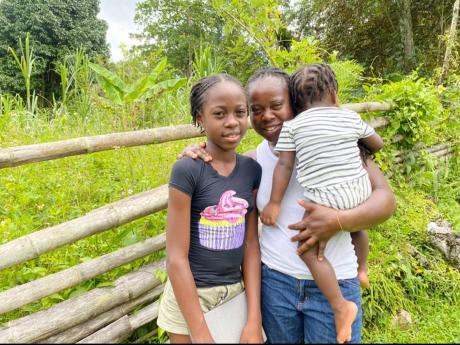 Photo by Ainsworth Morris
Coniesea McFarlane stands with her mom, Marcia Martin, and Coneile McFarlane in the area they receive good data service to log in to online classes. 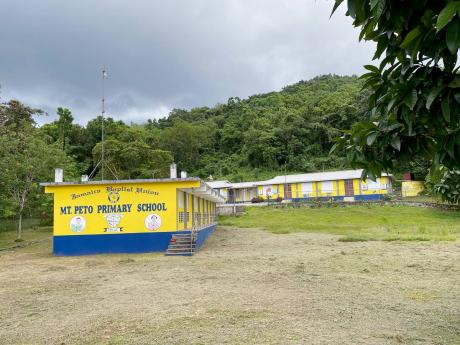 Eighteen months after the COVID-19 pandemic threw the education sector into disarray after the first case of the coronavirus was confirmed on the island, some parents are concerned that their children remain at a disadvantage as their inability to access online classes means they are being left behind.

Like those in other parts of the country, the parents in the island’s two westernmost parishes related their tales of woe battling unstable mobile Internet connections, intermittent power outages, and mounting bills for data plans adding stress to an already difficult remote learning situation.

In Porter’s Mountain, Westmoreland, as well as the districts of Bessie Baker, Mount Peto, Axe-and-Adze, Success and Chi-Chester in Hanover, they complained that neither of Jamaica’s two telecommunications giants – FLOW or Digicel – have provided the more reliable wired Broadband service so their homes could be connected.

Forced to turn to the choppy data service they received on their smartphones, they continue to face an uphill battle as the new school year kicks off.

Natalie Lyttle of Porter’s Mountain told The Gleaner that the last two school terms were particularly challenging for her and her daughter, Tianna Lyttle, a grade-five student at Mount Peto Primary School, and things are not looking up.

“From week, she nuh go pan no class because di Internet and di code weh di lady (teacher) de gi, we can’t go in,” she said in evident frustration.

“Dem nah learn nothing. Mi want dem go face to face because dem nah learn a thing over the phone. [Mi] rather dem teacher tan in front a dem and teach dem,” she added.

The education ministry has said that schools will not be allowed to return to face-to-face classes until at least 65 per cent of the students are vaccinated against the coronavirus.

Last month, the Government began offering COVID-19 vaccines to children 12 years and older after a shipment of the Pfizer jabs arrived.

With no Wi-Fi hotspot available close to home, Lyttle expressed concern that she was missing out on lessons.

“A now and again she go on, and when she do go on, she nuh get fi go in because, mi nuh know if a tru we live round here so, di service poor. ... ‘No Internet connection’ – a that we a get,” she said of messages displayed on their devices.

“We buy card and put on the plan. It expensive! If you put on one day, yuh know seh a $150 fi one-day [mobile data plan], and roun’ here so, yuh only sell card fi like $160, and you affi put on two a dat, and yuh know seh dat a $320 fi get one day,” Lyttle told The Gleaner, adding that the plan sometimes expires without her daughter gaining any access to the service.

Tianna is also tired of the struggle.

Marcia Martin, who lives metres from them but on the other side of the Westmoreland-Hanover border in Bessie Baker district, is equally drained.

Her daughter, Coniesea McFarlane, a first-former at the St James-based Anchovy High School, is also having to depend on the poor mobile Internet service.

“Sometimes, we have to go into the pass to get some data,” Martin told The Gleaner, before pointing to an open green space on a nearby hill.

As if that is not enough, they also reported being without electricity for days each month due to power outages.

“Sometimes no current [for] three days – sometimes, four days – and no running water. We are so frustrated ... ,” she said.

Another Porter’s Mountain resident, who has four children and is the guardian of a nephew, said her children missed several classes last school year due to power outages and Internet issues.

“They haven’t performed that well because the system was in and out. The [Internet] service was very, very slow ... . The electricity, sometimes [goes] for four days if there is rain or trees going down ... . When we don’t have any light, the Internet goes, too, unless the Digicel [representatives] come,” she told The Gleaner.

There are between seven and 10 power outages monthly, she said.

Choosing between data and food

Nadienne Crossman, principal of the Mount Peto Primary School in eastern Hanover, acknowledged the learning loss among her students due to challenges accessing classes.

“We talk about learning loss and it’s a reality, but we cannot sit and fold our arms. We have to get with the times. We have to do our best,” Crossman said, adding that she and her staff try to assist the students with handouts and help then navigate the online space.

“The parents have to rely on data and most of our parents – about 60 per cent or more – lost their jobs since COVID, so it is a matter of juggling: Do I buy data today or do I put food on the table?” she said. “So the parents do have to make a serious choice as to how the students attend classes [online].”

Crossman said that although the school was able to provide devices to some students with the assistance of the Programme of Advancement Through Health and Education and Hanover Charities, Internet connectivity remains a challenge.

She said that discussions were under way with the Universal Service Fund, which donated a computer lab to the school in February 2017, to reinstate the free Internet service.

“We need all of our students on board. And we’d have thought that between March 2020 until now, there would have been some amount of fast-tracking and some urgency in making sure that all our schools have or are connected properly,” she said.

“I do know that the Ministry of Education is doing its best and some schools have being selected to be on [an] Internet remote programme, but then the urgency is not urgent enough, as those who are in dire need of being connected [are many],” she added.

Digicel Corporate Communications Manager Elon Parkinson said the terrain could be affecting the consistency of the Internet service in Porter’s Mountain and its adjoining districts with the many hills and valleys.

“There’s another thing, though, theft and vandalism, man-made stuff,” he added.

“Because the sites that serve areas like that would likely be in ... remote areas, you find that there is a lot of theft and vandalism that take place at the sites,” Parkinson said, adding that the dry cell batteries, generators and fuel were key targets of the crooks.

“In a lot of cases, these areas don’t have roads as such, so reaching to the cell sites is a whole lot of trekking, and that, in and of itself, gives these guys enough time to escape,” he told The Gleaner, noting that he would raise the issue with a technical team for that area.

Winsome Callum, communications manager at the Jamaica Public Service, said that the electricity matter would be investigated.