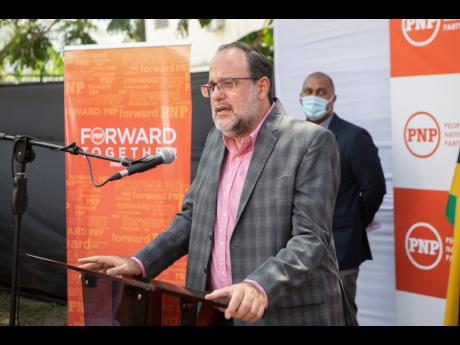 The People’s National Party (PNP) continues to sink deeper into the political wilderness, taking a severe hit to its positive performance rating over a one-year period.

An RJRGLEANER-commissioned Don Anderson poll showed the Opposition party slipping by six percentage points from 16 per cent in July 2020 to 10 per cent in August.

More people also had a negative rating for the embattled party, with the strains of a very still-divided leadership proving heavy, as an overall 52 per cent viewed its performance negatively when compared to 43 per cent last year July.

Nineteen per cent of the 1,003 Jamaicans surveyed between August 19 and September 3 rated the PNP’s performance as very poor, while 33 per cent judged it as poor.

The poll has a sampling error of plus or minus three per cent.

The canvass also showed that PNP President Mark Golding, who unexpectedly took over the reins of the 83-year-old party last November, continues to sit atop a shaky perch as his performance rating slipped by five percentage points, dropping from 16 per cent to 11 per cent.

On Monday, Golding told The Gleaner that his poor rating, while not surprising, is due to a lack of visibility on the ground with COVID-19 restrictions imposed by the Government being the root cause.

“From February, really, I have not been around much on the ground the way that we were doing prior to that. Every week before that, I was in a different parish, but we had to put an end to that because we didn’t want to be criticised for flouting the anti-COVID measures,” he said, adding that significant work has to be done to raise his national profile.

He said that this will be the focus of his second year in office.

Golding has had a rocky first year of presidency, suffering a huge blowback in July when his three vice presidents and chairman resigned en bloc, sending shock waves throughout the political landscape.

The resignations of Phillip Paulwell, the then party chairman; Mikael Phillips; Wykeham McNeill; and Damion Crawford were seen in some political quarters as an own goal against an already badly bruised party.

Golding said, undoubtedly, a number of events that occurred internally this year contributed to the poll findings.

“Some of the things that have happened in the course of this year internally, which were unfortunately not done behind the scenes but were projected into the public domain, would have given people who were polled some concerns about the Opposition and whether or not we are moving forward as one united force,” said Golding.

He said, however, that people are now noticing the positive direction of the party and are now getting on board.

The PNP leader said in the next few months, which would see him entering the second year of his tenure, the bedevilled party will be showing a more cohesive face going forward.

Ten per cent of those canvassed said Crawford was the best opposition performer when compared to Hanna, the St Ann South Eastern member of parliament, and Golding, who each received the nod from eight per cent of Jamaicans.

Crawford’s rating represents a five percentage-point increase since last year July. He was the only opposition spokesperson to improve and to see double digits.

Peter Bunting, the former Manchester Central member of parliament whose challenge to former PNP leader Dr Peter Phillips fizzled two years ago, also took a beating, as his performance rating decreased sharply from 22 per cent to two per cent.

In the same breath, Crawford, who has the entertainment portfolio for the Opposition party, was found to be the worst-performing spokesperson.

Anderson explained that of the 1,003 persons polled, 10 per cent identified Crawford as the best spokesperson, leaving 900 people who did not respond.

He said when the same 1,003 Jamaicans were asked to identify the worst-performing spokesperson, six per cent selected Crawford.

“It wouldn’t be the same 10 per cent. It would be six per cent of the 900 who did not respond previously,” Anderson told The Gleaner, adding that the lion’s share of respondents did not provide a rating.