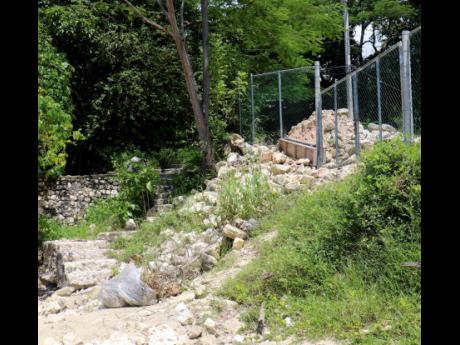 Ashley Anguin/Photographer
The newly erected chain-link fence restricting access to the Urban Development Corporation (UDC)-managed Bluefields Beach via the Bluefields Bay Villas property. The villa operators and the UDC are urging the public to access the beach through its formal entrance. 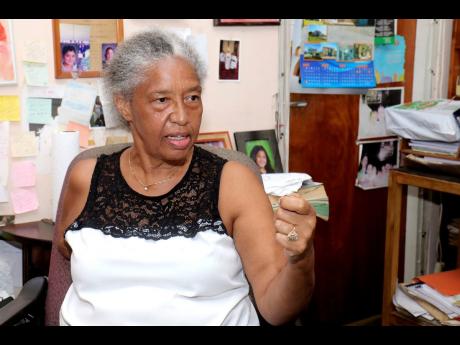 Ashley Anguin/Photographer
Erma Ridgard says that accessing the beach via the formal entrance is a challenge, especially for elderly residents.
1
2

WESTERN BUREAU: A group calling itself Friends of Bluefields Beach in Westmoreland has threatened to take civil action against a prominent business operator in the community if a chain-link fence erected last week is not removed, claiming that it...

A group calling itself Friends of Bluefields Beach in Westmoreland has threatened to take civil action against a prominent business operator in the community if a chain-link fence erected last week is not removed, claiming that it is restricting access to the public beach.

However, Andrew Moncure, one of the partners of the Bluefields Bay Villas, told The Gleaner that the fencing was erected to protect themselves from any liability as residents were using his property to access the Urban Development Corporation (UDC)-managed beach outside of the permitted hours for opening under the Disaster Risk Management Act.

In a release yesterday, the state agency said that while it was aware of the issue, it does not own the property on which the fence was erected and noted that the UDC’s gate to the property would remain open to the public daily, from 9 a.m. to 5 p.m. with the exception of no-movement days.

“Visitors to Bluefields Beach Park are invited to continue to use the formal entrance to the property and note that the corporation is committed to improving access to the beach park to support the needs of our guests,” it said.

However, one sticking point, especially for elderly residents, is that the stairs leading from the villas to the beach was more easily accessed and would not require the discomfort of stepping down as sharply as needed from the UDC’s entrance.

“Without any notice, a fence went up in three days, blocking access to the sea,” charged attorney-at-law and former senator Frederick Hamaty, the spokesman for the group, calling on the operators of the villa to “remove the fence and restore access”.

He threatened that a class-action suit would be filed against the villa operators under Section Four of the Prescription Act if this is not done “to bring proper order and justice to the people who have been using this beach for years”.

“I understand the concern for the senior citizens and we are going to reopen the gate so that people can use it,” Moncure told The Gleaner, noting that he had informed the UDC in July that it would need to build its own stairs for the public to access the beach, but this has not materialised.

Sixty-nine-year-old retired banker Erma Ridgard said that the newly erected fence and the blocking of the stairs are preventing her and other senior citizens from accessing the beach, which many of them have used for therapeutic treatment.

“It is posing a challenge, especially because we have a lot of people who are up in age. We have people there up to 85, and it’s a regular thing for them to come to the beach in the mornings, and some will have problems walking. We are all used to those entrances which are now being shut off from us,” she said.

Moncure said that he has offered to pay to construct the stairs with railing for senior citizens so that they can access the beach.