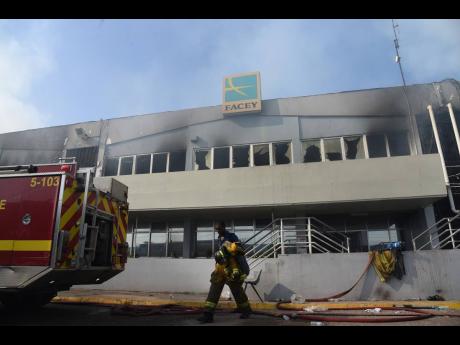 Ian Allen/Photographer
A fireman trudges away on Sunday from the scorched shell of the Facey Commodity building on Marcus Garvey Drive, Kingston, that was engulfed in flames Saturday night.

As a raging fire swept through the Newport West warehouse and offices of Seprod on Saturday night, CEO Richard Pandohie said he parked his car in front of the Facey Pharmaceutical Division of the manufacturing and distribution conglomerate. He...

As a raging fire swept through the Newport West warehouse and offices of Seprod on Saturday night, CEO Richard Pandohie said he parked his car in front of the Facey Pharmaceutical Division of the manufacturing and distribution conglomerate.

He said it was a real, if not symbolic, attempt to prevent another important part of the hulking J$46.27-billion conglomerate from going up in flames.

“That fire would have to pass me,” Pandohie quipped.

But beneath the stoic smile, Pandohie and his executives will have a headache evaluating the knock-on effects of the preliminary loss estimate of $1 billion and climbing. That sum, he said, did not include equipment or the 95,000 square feet of warehousing space.

“That’s just on goods that were there. They’re still doing cooling-down operations, so nobody has been able to go in and do a complete assessment,” the CEO told The Gleaner in an interview on Sunday.

The loss of the Facey complex has been described as a major blow, with the location serving as the central distribution hub, housing all cold storage and most of the consumer merchandise.

Pandohie sought to assure customers and traders that there will be no disruption of supplies.

“Our company was never about buildings. It is about the people and the brands that we represent to our customers and consumers. There is no question that we will be billing and delivering Monday morning,” Pandohie said in consultation with Robin Bloomfield, head of warehousing and logistics.

Altogether, almost 1,000 workers will be affected. This includes 600 permanent staff and another 400 or so contractors by way of truckers and casual workers.

The catastrophe at Facey Commodity is already having consequences that go beyond commercial concerns.

Loraine Barrett, a 30-year employee of the company who now works as a merchandiser, described the destruction as painful.

“This is like having a child and they grow big. You love them, you care for them, and then you lose them. Then the pain you feel ... ,” Barrett told The Gleaner.

Barrett said that workers are shellshocked by the scale of the ruination.

“We live here, the workers are like one family, we relate to each other, we work as a team, people come people go, we still work as a team, we are strong together,” she said with tears in her eyes as she looked across at the black smoke billowing from the building she called home.

Sean Hastings, a merchandiser, was overwhelmed on Sunday as he pondered his next move.

“When you see your company of 10 years burnt to the ground like this, it’s a challenge. You are thinking whether you are going to be out of a job,” Hastings said.

Pandohie disclosed on Sunday that all jobs were safe.

The CEO said that team members acted heroically to save trucks and some equipment at the location, and these will be pressed into action as part of the recovery effort. The team, he said, had started making alternative arrangements from as early as 2:30 Sunday morning.

The conflagration is said to have started about 8 p.m.

Loss adjusters from insurers General Accident were busy totting up the scale of the damage early Sunday.

Seprod has another 100,000 square feet of warehousing space but is on an all-out search for suitable storage capacity.

“We’re actively looking for additional space as we speak. I must say that there has been an overwhelming outpouring of support even from persons who are normally competitors. The spirit is this is one Jamaica,” Pandohie noted.

Asked about the probable cause of the fire, Pandohie deferred to investigators.

Sources close to the investigation but not authorised to speak have suggested that the root of the blaze might have been electrical.

The deal saw Seprod taking over all the assets and brand distributorships, including Eve, Goya, and Post. The acquisition has served to boost revenues and shore up the bottom line at Seprod.

– Ruddy Mathison contributed to this story.