Climate crisis a matter of urgency 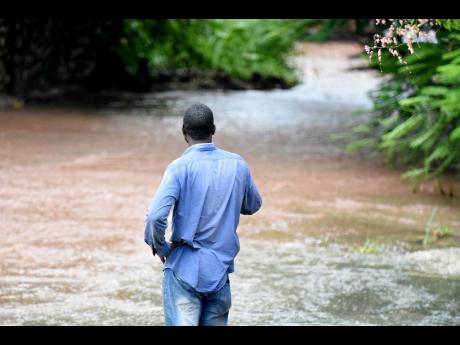 File
The driver of a Suzuki Grand Vitara SUV looks on at floodwaters after being rescued late last month. The vehicle was swept away after he tried to cross a flooded section of the gully in the vicinity of Charlton Avenue, St Andrew.

Disaster management specialist Ronald Jackson is lamenting the ad hoc approach to addressing environmental issues without deliberate, long-term planning in many developing countries, saying that it is already wreaking havoc on their economies.

In many cases, he told The Gleaner, these situations are made worse by the push towards national development in the construction of new roadways, high-rise apartment buildings, new factories and schools.

He warned that many of these countries are left sitting on a time bomb of their own creation, adding that urgent, decisive action is needed to slow the rate of accelerated self-destruction facing the world.

Jackson noted that the politics of disasters – a reality in developing and developed countries – directly impact climate-change issues, which are taking on a greater urgency as evidenced by the fallout from modern developments.

“What we have to appreciate is that, in any policy decision you take, there are going to be trade-offs. The challenge we face in that regard is how we are able to identify the trade-offs based on the political economy and forecasting what are likely to be the consequences of these trade-offs. And this goes across political transitions,” the former head of the local Office of Disaster Preparedness and Emergency Management told The Gleaner.

What must take place, according to Jackson, are simultaneous interventions, starting with everyone being made conscious of the need to support environmental resilience.

“Our exposure is being increased, so we have to invest in reducing our exposure by strengthening our ecosystems. Our environmental preservation programmes have to occur now. We can’t wait. So coral reefs have to be restored as quickly as we can; our forests, we need to ensure that we invest in natural lungs within the urban space and around country because these are buffers,” he noted.

Turning to the Caribbean, Jackson said that the region is struggling in the area of infrastructure maintenance, calling for a fresh approach.

“It’s not about the symptoms. Flood happens, so we attack the flood. Earthquake happens, we attack the earthquake, but we need to go back to the source of the problem,” he said, adding that disaster resilience must become a part of a national plan to ensure that natural hazards are less impactful.

In recent times, Jamaica has seen more flooding in rural and urban parts of the country, despite the advances in construction and other technology.

Jackson used regional neighbour Dominica, where Hurricane Maria in September 2017 triggered widespread destruction because of landslides and flash floods, to paint a picture of how Jamaica can improve its resilience.

Since then, government representatives at various levels have been taking a serious look at developing a resiliency programme.

“Dominica has articulated, for example, a very clear pathway around how they want to go about addressing these consequences that they face, and they are looking at it from a holistic point of view. They are looking at the drivers of risk and the enabling elements to try ensure that they can project into a resilience-building future,” said Jackson.

“Are they going to be successful? We have to wait and see, but the point is yes, policymakers are now getting that understanding that where we need to get a little more focused is in the policymaking process is to slip away from this singular reflection around either climate and disaster. ... We have to plan with an understanding that, in a given year, we can be faced with what we call a compounding crisis,” he continued, noting that planning was key to how quickly countries bounce back from disasters.