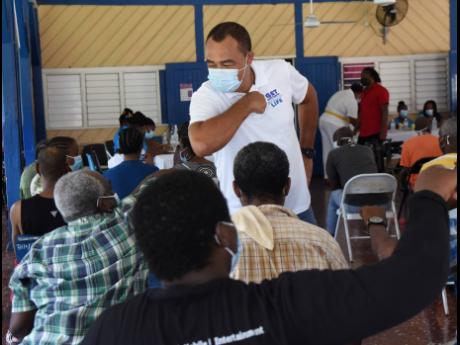 With two recent cases of persons with mental illnesses reportedly killing two men within the public space and other persons escaping serious injury after being attacked, the health ministry is moving to boost its community-based intervention programmes.

Health and Wellness Minister Dr Christopher Tufton yesterday said that, even with intervention by the Government to safeguard the lives of citizens from such attacks, it will take the efforts of multiple organisations to reduce the risk to the public.

“We have, for example, hired more community mental health aides. We have expanded the mobility of the mental health team; more vehicles for them to respond. We are doing greater sensitisation at the level of the community and we collaborate with the Ministry of Local Government and Community Development,” Tufton said in an interview with The Gleaner during a vaccination drive at the Bellevue Hospital in Kingston.

“We are collaborating. We are trying to improve on the process by adding more people, but it’s an ongoing challenge that we have to just keep reviewing and adjusting as the problem becomes more chronic and as the problem arises,” he added.

Last weekend, a mentally ill man was shot dead after he turned on cops as they tried to apprehend him after he had decapitated a homeless man in St Ann’s Bay.

Days before, another mentally ill man was killed by a police team trying to detain him in Linstead, St Catherine, after he had dealt a cop, Paul Gordon, a fatal blow to the head with a stone.

The Jamaica Police Federation and other groups renewed calls for the Government to remove persons of unsound mind from the streets to prevent harm to citizens following the incidents.

Tufton said that help is available for cops to keep them safe as they respond to challenges families and communities face with mentally ill persons.

“The parishes all are equipped with mental health nurses, mental health doctors and mental health aides. So where someone is determined to be abandoned and have mental health issues, the police alone cannot do it. It has to be a shared duty on the part of the mental health clinician and their support staff, and the police, in cases where persons are aggressive,” he said.

He noted that there was more need for cross-training for cops so they can better understand the mentally ill and allow them to tailor better approaches when interfacing with them.

Tufton pointed out, too, that there are also mental health teams that deal with persons who are incarcerated.

“There is a mental health team that mans the prisons or medical team that is assessing people’s mental state, and there is an approach to dealing with that. Is it enough in terms of the personnel? To be totally frank, it’s never enough. It’s a process that we have to review and, where the problem is significant, we try to adjust to pivot to deal with it,” he said.