Teen awarded for braving burning house to save neighbour 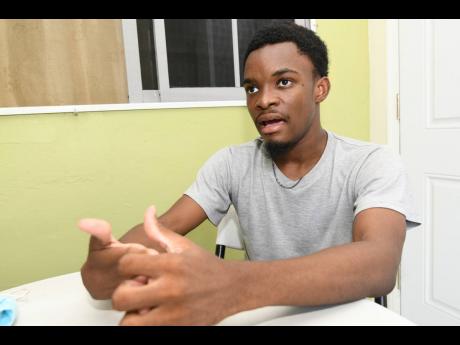 Rudolph Brown/Photographer
Kyme Duncan, recipient of the Badge of Honour of Gallantry, recounts how he saved an elderly man from a house fire in Tower Isle, St Mary, earlier this year.

When Kyme Duncan was jolted from sleep by the shrill cry of his helper with news that his friend’s house was ablaze, he was spurred into action to assist his neighbour. That dedication to his Tower Isle community saved the life of his friend’s...

When Kyme Duncan was jolted from sleep by the shrill cry of his helper with news that his friend’s house was ablaze, he was spurred into action to assist his neighbour.

That dedication to his Tower Isle community saved the life of his friend’s elderly and physically challenged father, who was caught in the clutches of a burning building seven months ago.

Duncan, recipient of the Badge of Honour for Gallantry, is among more than 140 people who will be recognised during today’s airing of the annual National Honours and Awards ceremony. This year’s awards are being held virtually because of the coronavirus restrictions.

Duncan remembers the March 6 near-tragedy like it was yesterday.

Awakened in a daze, Duncan reached for his phone to call the fire department but realised, moments later, that the situation was graver than he initially thought.

By the time he got to his garage, from where he could see the neighbour’s house, Duncan heard his friend scream. Immediately, he dropped the phone and ran over to help.

Duncan had been friends with Lawrence Pinnock, who he describes as being like a brother, for more than nine years. The pair became closer after Pinnock returned to the community to take care of his elderly father.

Undaunted by the billowing black smoke and armed with a bike helmet, Duncan wrapped his shirt around his face and gingerly entered the house.

“The heat was very oppressive even though the fire had died down a lot. It was a hostile environment. I would not be able to tolerate it if I did not have an agenda of going in there to try and find the old man,” he told The Gleaner on Sunday.

By then, the cries from his friend’s father had been replaced by a faint groan. Duncan’s keen ears followed the faint sounds that eventually led him to the kitchen, where he discovered the man crouching in a corner.

“When I initially found him, it was a mixture of relief and the kind of fear setting in at the same time … . But now that the excitement had started to die down, it kind of set in what I was really doing, and it was a bit of a wake-up call, and I was, like, ‘Wow! I just crept through a burning building,’” said Duncan.

He and Pinnock rescued the old man by sliding him under the broken grille of the garage, which was adjacent to the kitchen.

Some time later, Duncan described the shock he had when he got a call from the Office of the Prime Minister informing him that he would receive the Badge of Honour for Gallantry.

“I thought that I was going to be in trouble,” he laughed. “I was excited and happy, and I ran to tell my father. He was watching news at the time, and I ran to tell him. That was a happy evening,” he said, adding that he dedicated the award to his community as they all came together to assist one of their own.

Duncan told The Gleaner that passion was one of the values that his mother taught him before she passed away while he was doing his Grade Six Achievement Test (GSAT) examinations.

“One of the main things I would have gotten from my mother is that I have a certain stubbornness and I have a lot of patience at the same time. I guess it goes hand in hand,” said Duncan, who is dyslexic.

He also credited his mother’s fervour for battling and overcoming the reading disorder.

This has left a lasting mark on the first-year law student, who is now pursuing studies at The University of the West Indies.

Guided by the philosophy to do right and be a positive influence, the teenager is urging Jamaicans not to be slaves to fear.

“Being brave doesn’t necessarily mean you don’t feel fear. It is more of accepting that even when you are scared … there are some things that you just have to do,” he said.