‘A house divided will not stand’ 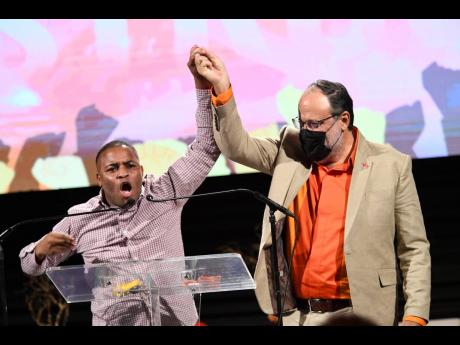 Rudolph Brown/Photographer
Akeem Dobson (left), PNP YO vice-president, introduces Mark Golding, president of the PNP, before he addressed the 83rd annual conference at the Creative Production and Training Centre on Arnold Road, Kingston, on Sunday.

In a no-holds-barred address to Comrades at the People’s National Party’s (PNP) 83rd annual conference on Sunday, former president P.J. Patterson called for all hostilities within the organisation to cease as he delivered a sharp rebuke to warring factions.

Declaring that it was time to renew trust and instil hope, Patterson warned that the party was doomed to defeat and self-destruction if it continued to engage in th.

Echoing similar sentiments, immediate past president of the PNP, Dr Peter Phillips, argued that the democratic structure of the party had always facilitated contending views without descending into personal abuse or rank disrespect.

“It was true in the past, it is true now: It will forever be true that a house divided against itself will not stand,” Phillips reasoned.

He said the country needed an “authentic PNP where internal democracy is alive, where its integrity is unassailable”.

Phillips said that Jamaica needed a PNP that respects its leaders and protects the rights of every member.

Taking a jab at the ruling Jamaica Labour Party administration, which has been dogged by a string of public-sector scandals, Patterson said that “Jamaica is not a piggy bank which you raid – where you come and steal what you see.

“When will there be a stop to pouring taxes into a Treasury where public finances are pilloried by those who use their appointments or placements in ministries, departments, and boards to find new ways of dipping and grabbing all they can to satisfy their insatiable greed for more?” Patterson questioned.

But the PNP stalwart spent the better part of his presentation lecturing and castigating Comrades who have brought the party into disrepute.

In a virtual address to the conference, Patterson described members who sowed seeds of discord within the organisation as “enemies of progress” who “mean the party no good”.

Commenting on scathing social-media exchanges between party members, Patterson said that the “atrocious postings should be deplored and cease even if they were to be uttered against the JLP. Remember, we are rivals for power not perpetual enemies at war”.

Noting that he was chastising them with a “heavy heart”, the former party president said that he could no longer bear the pain that comes from a party in internal conflict.

“Do we want to remain a house divided against itself which cannot stand? Or do we regain our sanity to unite as one?” Patterson asked.

In July, the disunity within the PNP became starker when four vice-presidents - one of whom was its chairman - resigned en bloc . They expressed a lack of confidence and distrust in the leadership, and their resignation was yet another saga that dealt a severe blow to the party.

The party’s general secretary, Dr Dayton Campbell, has also been the target of sexual allegations made by now-expelled member Karen Cross. Campbell has denied the claims and filed a defamation suit against Cross and Natalie Slack.

Patterson chided the divided factions within the PNP, saying that no one had sought to seek his advice on how to unite the party.

According to Patterson, for 14 years, he led a united, invincible party. “I am willing to hold school about it if it will help us to know how it was done, quietly and constantly,” he added.

The caricature of the PNP at war in the newspapers did not escape Patterson’s keen attention as he declared that “cartoonists are having a field day” in relation to the party’s disunity.

He also observed that the fierce infighting has left columnists commenting that co-founder of the PNP, Norman Washington Manley, and former president Michael Manley must be turning in their graves at the state of the party.

“My message to you is clear: End the divide now and unite to rise as one party that is moving forward and onward,” he said.

He urged Golding to declare that the time has come for all hands aboard. “Mine, even at this stage of life, will always be ready to do whatever I can,” said Patterson.