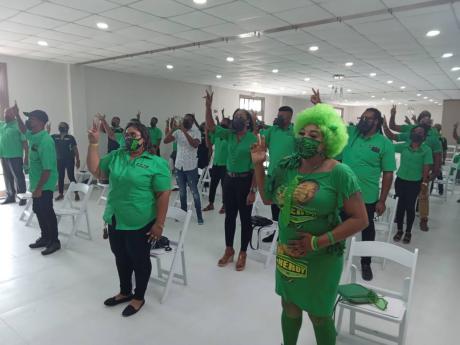 Photo by Albert Ferguson
Labourites participate in the JLP annual conference from a remote location at the James Hunter Event Centre in Negril, Westmoreland, on Sunday.

Political battle lines have been drawn as the Jamaica Labour Party (JLP) seeks to end the People’s National Party’s 40-year control of the Westmoreland Municipal Corporation (WMC) when the next local government elections are held.

The elections are constitutionally due by next February, but may be pushed back to a later date because of the coronavirus pandemic.

But chairman of Area Council Four, Floyd Green, has issued a warning that the party has the arsenal to end the opposition party’s reign.

“I am serving notice on the Westmoreland Municipal Corporation that the time has come, because leadership matters,” Green declared while addressing the JLP’s 78th digital anniversary conference at the James Hunter Event Centre in Negril, Westmoreland, on Sunday.

“Leadership matters, and that is why we are going to redouble our efforts on the municipal elections, whenever it is.”

The JLP will be banking on exploiting the momentum which caused a sea change in Westmoreland in September 2020, turning the entire parish - a long-time bloc of PNP support - green in a landslide victory that gave it 49 of the 63 seats in the House of Representatives. (That majority has fallen to 48 with George Wright becoming an independent because of an assault scandal).

Currently, the JLP controls three of the five municipal corporations in western Jamaica, with the PNP maintaining a stronghold in Hanover and Westmoreland.

But incumbent chairman of the WMC, Bertel Moore, who is retiring, is confident that his party will retain control of the coveted corporation when the ballots are counted.

The JLP won five of the 14 municipal seats in the WMC in the last local government elections in 2016, including the Cornwall Mountain, Petersfield, Frome, Savanna-la-Mar and Friendship divisions.

In Westmoreland Central, the JLP won Petersfield by 232 votes after polling 1,455 to the PNP’s 1,223 with George Wright against the PNP’s Donnavon Gooden. Wright is now the independent MP for the constituency.

Rudolph Uter of the JLP defeated Andrew Wilson of the PNP by 91 in the Frome division after polling 1,243 to 1,152.

Dawnette Foster finished with 105 more than the PNP’s Roger Allen in the Cornwall Mountain division. She polled 1,319 to Allen’s 1,214 votes.

The Savanna-la-Mar division was counted in the JLP column with a margin of 62, after Lee Simpson ended the political reign of Milton Miles. Simpson polled 1,308 to Miles’ 1,246.

Kevin Murray was the sole JLP winner in Westmoreland Western after toppling his opponent by a margin of 57. Murray received 1,014 votes to the PNP’s Lloyd Allwood’s 957.