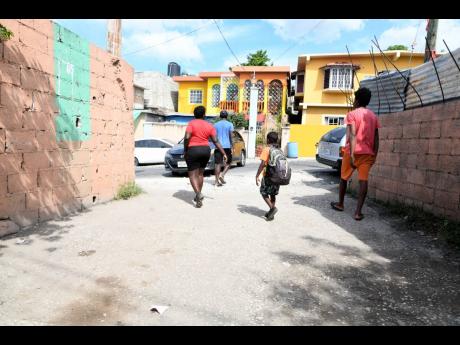 Rudolph Brown/Photographer
Residents walk along Grant Lane in Cassava Piece, St Andrew, yesterday following a shooting in the area on Thursday night, which left a 13-year-old girl and a man injured.

Residents of Cassava Piece in St Andrew are remaining tight-lipped about a shooting incident in the Grant Lane area of the St Andrew community on Thursday night, which left a 13-year-old girl and a man injured.

According to Detective Inspector Karen Salmon of the Constant Spring Police Station, a group of persons were playing a game of dominoes about 9:15 p.m. when gunmen approached them and began firing shots wildly.

She said that both victims were taken to hospital and their injuries were not considered serious.

The injured man is believed to have been the intended target.

Yesterday, when The Gleaner visited the area, which is roughly 600 metres from the Constant Spring Police Station, residents refused to even acknowledge that a shooting had taken place.

Salmon said that the Community Safety and Security (CSS) Branch of the St Andrew North Police Division has been working to eliminate violence taking place in Cassava Piece and other areas.

“We have police presence. We have spot checks. We have snap raids. We have targeted operations. We have flag march ... ,” she said. “several service vehicles going through the areas – the various hotspot areas and other areas. We also have vehicle checkpoints.”

She noted that numerous youth-based and community-based interventions have taken place as well.

“We have an initiative for the last three weeks, that was a new initiative, where we have external persons come in along with the CSS persons, a representative from CIB (Criminal Investigation Branch) and other entities would go there and speak to persons on domestic violence, as well as to speak to them on how to prevent the basic types of crime,” Salmon said.

Recent intervention programmes were held at the nearby Sunrise Health Centre and Constant Spring Tax Office.

The St Andrew North Police Division has seen a 25 per cent year-on-year decrease in shootings up to November 27, with 48 incidents recorded since January 1, compared with 64 for the corresponding period in 2020.

Homicides in the division have also fallen by 20.7 per cent, with 46 shootings up to last Saturday, compared with 58 last year.