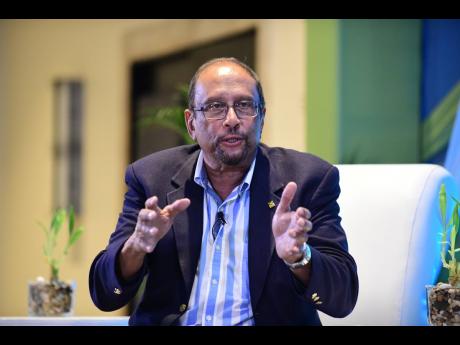 A fix to the ills in the public health system, Howard Mitchell believes, could start with the National Housing Trust (NHT) and its facilitation of accommodation for healthcare workers, the majority of whom, it is argued, are not earning liveable wages.

The chairman of the National Health Fund (NHF) said, too, that the statutory body responsible for providing affordable housing solutions must revisit its purpose amid the furore over who has been benefiting from the entity.

Mitchell, who was speaking at a Gleaner Editors’ Forum at The Jamaica Pegasus hotel in New Kingston on Wednesday, said that money alone cannot be the fix for the contentious matter.

Contending that the Government would never be able to compete with more developed countries regarding salaries, the former Private Sector Organisation of Jamaica head said the fix requires placing public health at the top of the State’s priority list.

Mitchell called on the NHT to construct solutions in the proximity of hospitals, reducing the need for far travel, alleviating security concerns and the burden of having to pay for accommodations.

He said that this is critical in light of the country’s battle to retain its human resources in the field.

“We have to [ensure] that the public health worker, along with the security workers, along with the people who are critical at the point of first delivery to get access, perhaps on an easier basis, for some of the developments,” Mitchell said.

He said that while there are health-sector workers who have no desire to own homes, they need a break.

“There are people who, if they get a break in their employment – like nurses and doctors and ancillary staff – can save some money towards buying a house eventually when they, perhaps, shift from that critical point,” Mitchell added.

He said it was clear that public health encompasses more than focusing on the end process of a crisis and must be reassessed to correct the challenges facing the sector.

Health and Wellness Minister Dr Christopher Tufton, who was also a guest at the forum, agreed that money was not the sole contentious issue among healthcare workers based on his research.

He said while it was important, other variables play equal roles in the challenges facing workers.

“My own research has shown that healthcare professionals require security of tenure,” he said.

Tufton said that the ministry has reclassified thousands of positions, primarily in nursing, over the last three years to give workers permanent status instead of contracts.

He said that the working environment and the burden of infrastructure development and remuneration are the other factors that account for major issues among workers.

“Remuneration is an issue. There’s no doubt that they deserve more, [but] of course, that has to be reconciled with the public system and the Ministry of Finance and by extension, the Cabinet,” he said, adding that talks on the issue are taking place.

“We have to look at it as a package, and I think that as much as we try to give as much as possible in salaries, we’re also making a valiant effort to improve the working conditions and to provide security of tenure,” he said, noting that the hope is to incentivise healthcare workers to have them wanting to remain in the country.