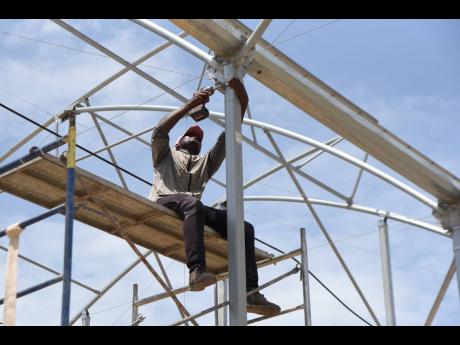 Kenyon Hemans/Photographer
A worker operates a drill on the Agri-Ventures site located in Lakes Pen, St Catherine, in July 2021. The real estate and construction industries have been leading lights of the Jamaican economy, helping in the recovery of workforce numbers to pre-pandemic levels.

Jamaica’s unemployment rate has returned to pre-pandemic levels, marking robust recovery after COVID-19 decimated the job market, leaving more than a hundred thousand jobless at the heights of the outbreak.

Findings from the Statistical Institue of Jamaica’s (STATIN) October 2021 Labour Force Survey showed that Jamaica’s unemployment rate (UER) was 7.1 per cent, a decline of 3.7 percentage points relative to October 2020.

But when compared with the similar period of 2019, prior to the outbreak of COVID-19, the report showed that the current unemployment rate is on par with an UER of 7.2 per cent.

“The number of persons employed in Jamaica in October 2021 is 16,700 fewer than in October 2019,” STATIN Director General Carol Coy said during the quarterly press briefing on Monday.

The reduction in unemployment comes amid economic growth of 5.8 per cent recorded for the third quarter July to September 2021.

Jamaica’s jobless figures had climbed as high as 12.6 per cent, or 135,800 positions cut in July 2020, with the tourism sector worst affected.

The ‘real estate and other business services’ industry recorded the largest increase in employment of 23.1 per cent, moving to 130,500. It was followed by the arts, entertainment, recreation and other services sector, which rose by 15.3 per cent to 111,500 persons and the construction industry, which grew by 13.2 per cent to 113,900 persons.

Coy said that the three industries accounted for 68.7 per cent of the increase in employment.

When measured against the October 2019 job performance, real estate, construction, and agriculture, forestry and fishing were the only industries to have surpassed their pre-COVID-19 employment levels.

She added that there were 35,400 more persons working in real estate, 9,300 more in construction, and an additional 4,800 in agriculture, forestry and fishing relative to October 2019.

Employment in arts, entertainment, and recreation and accommodation and food service activities industries were, however, lower than the pre-COVID levels, by 15.8 per cent and 10.6 per cent, respectively.

Broken down by occupation, the professionals, senior officials and technicians group accounted for the largest increase in employment of 25,800 persons for the quarter ending October 2019, with females accounting for majority of the increase.