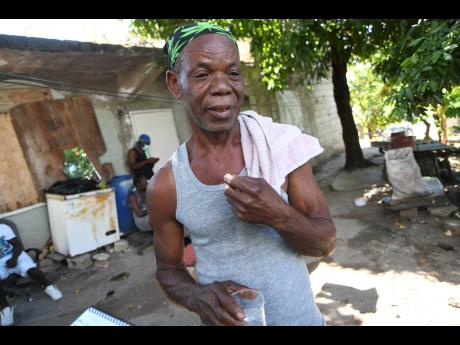 Rudolph Brown/Photographer
Eric Powell believes his 42-year-old son Shamari Powell, who was killed by gunmen in the Plum Lane are aof the Whitehall Avenue community in St Andrew on Sunday night, might have still been alive if he had avoided the tense streets as warned. 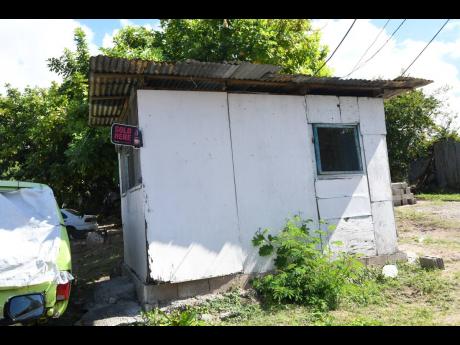 Rudolph Brown/Photographer
A small shop operated by Shamari Powell, who was one of three persons shot in the Plum Lane area of St Andrew on Sunday. Powell later died.
1
2

Hours after his 42-year-old son was slain in the Plum Lane area off Whitehall Avenue in St Andrew, Eric Powell took sips of an alcoholic beverage trying to soothe his grief as he pondered whether Shamari would have still been alive if he had heeded...

Hours after his 42-year-old son was slain in the Plum Lane area off Whitehall Avenue in St Andrew, Eric Powell took sips of an alcoholic beverage trying to soothe his grief as he pondered whether Shamari would have still been alive if he had heeded his mother's warning to avoid the hostile streets.

Shamari Powell was one of three persons shot in the area on Sunday night in what cops believe was an act of reprisal for a murder late last year.

Yesterday, as he was being consoled by other mourning relatives at the Ward Close family home, less than a mile from the murder scene, the senior Powell said that although he was aware of the tension, he never thought his son would have fallen victim to the bloodletting in the area.

“Friction deh deh all the while … . Him just deh pon di wrong ends at the wrong time,” he told The Gleaner.

Powell said that Shamari had been frequently warned by his mother to exercise caution amid the tension in the community.

“Him mother warn him fi leave the road and lock up in a the house and just easy himself and no bother come out pon di road wid the company,” said Powell, who last saw his son on Friday before he left to carry out some work in a rural area.

Upon his return Sunday night, he was greeted with the devastating news that Shamari was one of three people shot and that he had died instantly, leaving three children, who are also struggling to come to terms with his demise.

On hearing the heart-wrenching news, Powell said that he could only “tense up and bawl out”.

“Him nuh fighty-fighty, but tru him always hang out with company, yuh know. ... Him and him colleagues dem mussi a drink a one beer and so, and dem massacre him,” Powell said, noting that Shamari did not have a trade, but would do odd jobs, often operating a little shop.

The Gleaner reported last week that there was a sense of unease in a section of Collins Close in St Andrew following the December 29 murder of Trey 'Spliffy' Beckford.

Residents who spoke to The Gleaner said the homicide was a result of a dispute among friends.

A senior cop close to the investigation added that there seemed to have been a dispute over the sharing of ill-gotten gains from the lottery scam.

“The fatal attack [on Sunday] was a reprisal for the fren-turn-enemy killing late last year,” the senior cop said. “It is very difficult to monitor because these friends know each other and their whereabouts.”

When The Gleaner visited the murder scene on Sunday, residents wept as they condemned the attack.

“The whole a unno a did fren. Weh all a this for?” one woman wailed.

Reports from the Constant Spring police are that about 6 p.m., a motor vehicle drove up and parked before three men alighted and opened gunfire in a cul-de-sac off Plum Lane.

When the shooting subsided, it was discovered that Shamari and two other persons were hit. They were taken to hospital where Shamari was pronounced dead and the other persons admitted.

The homicide is the first recorded for the St Andrew North Police Division since the start of the year. Up to January 15, 72 murders had been recorded across the island.