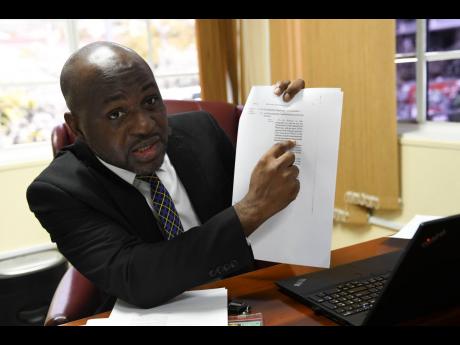 Ricardo Makyn/Chief Photo Editor
Chief executive officer of the Firearm Licensing Authority, Shane Dalling, points to a 2016 amendment in law which he says justifies the terms of his contract.

Chief Executive Officer (CEO) of the Firearm Licensing Authority (FLA), Shane Dalling, has signalled that he was not picking a fight with Auditor General Pamela Monroe Ellis but is insisting that her conclusions that his salary contract is in breach of government policy should have received the benefit of legal opinion from the Attorney General’s Chambers.

In a Gleaner interview on Monday, Dalling argued that an amendment to the Firearm Licensing Act in 2016 gave the board latitude to negotiate a contract with its CEO.

Dalling is relying on this specific clause in the legislation: “For the due administration of the Authority, the board may, with the prior written approval of the minister, appoint a chief executive officer of the Authority, at such remuneration and on such terms and conditions as the board thinks fit.”

He noted that the Fixed-Term Contract Officers Policy Guidelines were promulgated in 2012.

Dalling said he wrote to the auditor general outlining the amendment to the Firearm Licensing Act.

He contended that where policy and legislation conflict, it is the statute that takes pre-eminence.

“If the Parliament of Jamaica intended it to be guided, it wouldn’t say ‘as the board thinks fit’; it would say ‘in keeping with government guidelines,’” he argued.

Dalling pointed to his predecessor Dr Kenroy Wedderburn’s five-year contract, inked in 2015, which contained a similar provision in the termination clause to that of his.

“Policy does not override legislation,” the FLA boss said.

“It wasn’t Shane Dalling or Carter that brought that provision; it existed prior to,” he added.

He said that based on the provisions of the Firearm Licensing Act, “we do not believe that contract operated in breach of the Fixed-Term Policy Guidelines”.

The FLA head said that even if there was a conflict with the FLA law and the Ministry of Finance’s Fixed-Term Policy, “it is not something for the auditor general to resolve”. He said such a matter should have been referred to the Attorney General’s Chambers for its advice.

Dalling was also asked to comment on two provisions in the Public Bodies Management and Accountability Act (PBMA) in relation to emoluments and the role of the minister with responsibility for the public service.

In relation to ‘levels of emoluments’, Section 20 of the PBMA states: ‘In exercise of any powers conferred on a board by a relevant enactment or any constituent documents in relation to: (a) emoluments payable to the staff of a public body; (b) any other policy or guidelines applicable – the board shall act in accordance with such guidelines as are issued from time to time by the minister responsible for the public service and the minister, respectively’.

However, Dalling maintained that “even an existing policy, an Act of Parliament, could override a policy position, not in its entirety but specific to, for example, the FLA in the amendment to the Firearms Act”.

On July 13, 2021, Dalling appeared before Parliament’s Public Accounts Committee (PAC) after the auditor general reported that the FLA overpaid five staffers about $8 million in termination benefits, in contravention of the guidelines set out by the Ministry of Finance.

At the time, Dalling disagreed with Monroe Ellis’ conclusion, and the PAC directed that the separation contract issue at the FLA be brought to the attention of the finance ministry, for a legal opinion from the Attorney General’s Chambers.

Dalling told The Gleaner that the FLA wrote the finance ministry seeking clarification on the matter but did not get a response. He said up to last week, he sent another letter to the ministry reminding it that he is still awaiting feedback.

The FLA CEO said the claim by the auditor general that the provision in his contract put the Government at risk of paying out more is not accurate.

“The auditor general, in stating that is not telling the country the entire story because the auditor general is aware that the strict application of the Fixed-Term Contract Policy has led to greater payments than that which exist under my contract,” he said.

Dalling said he is prepared to have his contract amended to bring it down to two weeks’ notice instead of the current three months’ termination notice.