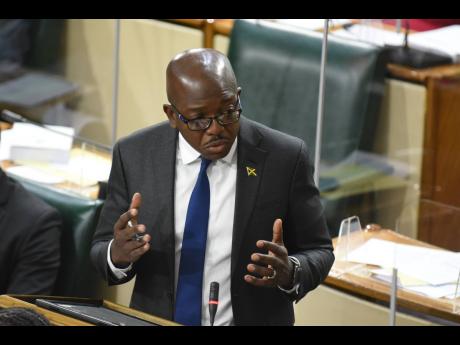 Kenyon Hemans/Photographer
Pearnel Charles Jr making his maiden address to Parliament as minister of agriculture and fisheries on Tuesday.

Major poultry producers Jamaica Broilers and Caribbean Broilers have cautioned the Holness administration against the proposed suspension of the Common External Tariff (CET), as well as stamp duties on imported leg quarters. That action, it is...

Major poultry producers Jamaica Broilers and Caribbean Broilers have cautioned the Holness administration against the proposed suspension of the Common External Tariff (CET), as well as stamp duties on imported leg quarters.

That action, it is feared, might open the floodgates to importers with incalculable consequences for large and small players.

Pearnel Charles Jr, weeks into the job as agriculture minister, has been accused of misunderstanding the workings of the industry that churns out Jamaica’s most affordable and popular source of meat protein.

The minister said that temporarily freezing the tariff would slash the price of leg quarters by more than half – from $360 per pound to $160 per pound – making chicken meat more affordable for Jamaicans whose incomes have been eroded by point-to-point inflation of 7.3 per cent.

That breached the Bank of Jamaica’s projected upper band of 6.0 per cent.

Charles lamented the soaring prices, remarking that chicken back – which has traditionally been much cheaper than premium parts – was almost neck and neck at cashier tills.

But Dr Keith Amiel, corporate affairs manager at Caribbean Broilers Group, rebuked Charles for making a “statement in ignorance” and accused him of “a lack of complete understanding of how the poultry industry functions; a lack of understanding of the billions of dollars that have gone into it”.

Amiel said that tinkering with the tariff regime would threaten an industry that supplies 85 per cent of meat consumption and which provided 30,000 jobs.

“I really recommend that he ask his technical people to inform him as to how the poultry industry is structured and to ask for tours of different categories of poultry operations, so he can see for himself before talking out of turn in public,” Amiel told The Gleaner on Tuesday.

President and CEO of the Jamaica Broilers Group, Christopher Levy, while voicing concerns about the statement, read more into the agriculture minister’s maiden address to Parliament.

He said that Charles had, in fact, pointed to the impact of inflation on food prices, as well as food security.

“He spoke about the packaging, cost of fuel, the broad things that are driving the cost of food. I think it has to be taken in that context. As to the argument about evaluating the removal of duties on leg quarters, I think that would be the absolute wrong long-term decision for the nation,” Levy told The Gleaner.

Any prolonged removal of the tariff structure, said Levy, could damage the local industry.

“With the stroke of a pen, you are talking about its destruction. So I do feel that sort of rhetoric is dangerous because now people are going to start thinking, ‘Do I invest in this industry further?’ The small farmers are going to look and think, ‘This man is going to mash up me business’ and you have a situation where your international and financial partners are going to say, ‘What’s happening here?’” he added.

Opposition Spokesman on Finance Julian Robinson questioned the impact of the revenue fallout on government coffers, as well as the measures that would be put in place to ensure transparency of the importation process.

But opposition lawmaker Anthony Hylton, a former minister of industry, investment and commerce, warned that the suspension of the CET could not be activated unilaterally but would have to be ratified by CARICOM and would require some time for implementation.

Charles, however, emphasised that the measure would be temporary - “until the local market recalibrates to normal levels where supply matches demand”.

He disclosed that the ministry has set aside $50 million, to be channelled through the Rural Agricultural Development Authority, in assistance for farmers for the purchase of feed, chicks, and medication for livestock.

“The reality is that what is being asked of me in specifics, I cannot give you a timeline,” he said of the tariff suspension.