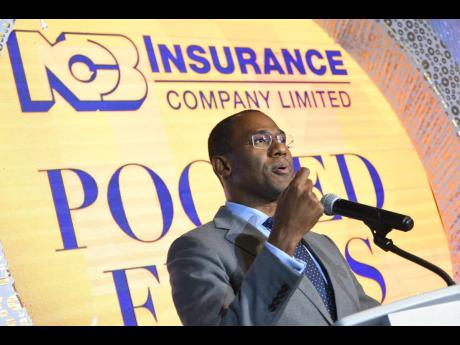 File
Dr Nigel Clarke, minister of finance and the public service, speaks at an NCB launch event at the AC Hotel in Kingston on November 7, 2019. Clarke has criticised banks for being tone-deaf in hiking user fees.

The National Commercial Bank (NCB) has indicated that it will not reverse its decision to increase fees, which took effect earlier this month, despite protest from customers and a caution from the Government that the banking sector’s disregard for fiscal realities on the ground may hurt the economy.

“We believe we have priced the services in a manner that gives our customers options to pay low or no fees,” NCB said in an emailed response to The Gleaner on Wednesday when asked about a possible rollback of the fees.

The commercial bank said that while the input costs for providing banking services in branch or via its digital channels have increased over the past two years, it has absorbed them, though continuing to ensure access and support to customers.

The bank also said that more than 70 per cent of its fees remain unchanged.

“We believe that the post-COVID normal is here as evidenced by the strong pace of economic recovery, which has been measured by macro-indicators,” NCB responded when asked about its decision to increase fees against the backdrop of the ongoing coronavirus pandemic that has toppled businesses and crippled economies.

The bank insisted that it had announced from as early as November last year that it would reintroduce some fees while revising others, effective January 3.

But a bone of contention for customers is the bank’s decision to apply fees to withdrawals from proprietary automated teller machines (ATMs).

On Tuesday, Holness, whose colleagues on the government benches rejected a Fitz Jackson-piloted banking services bill in 2018 crafted to regulate the sector, urged banks to operate with consideration of the economic climate.

“Persons whose income disappeared or was significantly reduced still have mortgages piling up on them, still have credit card bills that they were not able to pay. Children are now going back to school so fees are coming back in, bus fares and lunch money have to be paid, and now they have to hear about increases in bank fees,” charged Holness while speaking at a Jamaica Stock Exchange conference in New Kingston on Tuesday.

Clarke said on Wednesday that Jamaicans on lower incomes must be made to feel comfortable with using banking products, adding that he has engaged the institutions on the matter of fees.

According to NCB, its data show that the changes it has made, including fee waivers and free ATM withdrawals, will enable the majority of its customers to avoid fees.

But the greater share of the commercial bank’s customers hold savings accounts, suggesting that the majority will continue to be affected.

Despite this, NCB said that it has not passed on all input costs associated with operating.

NCB recorded its lowest earnings since 2017 when it made a profit of $19 billion last year, down from the nearly $27 billion it earned in net profit in 2020.

Discussions suggest that banks, the world over, are struggling to earn the old-fashioned way by just lending to customers and businesses, benefiting from interest.