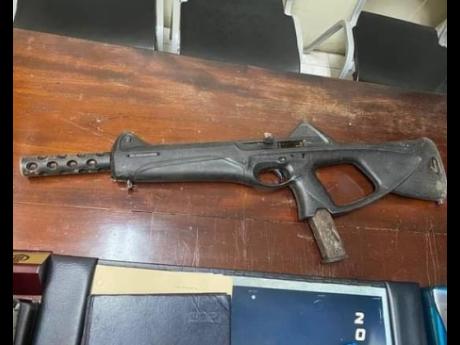 Contributed
A submachine gun seized in Chantilly Gardens, Westmoreland, during a police-military operation on Thursday.

A sub-machine gun and several items believed to be used in scamming were seized during a police-military operation in Chantilly Gardens, Westmoreland, on Thursday.

Three persons suspected to be major players in lottery scamming were taken into custody. Their identities are being withheld pending further investigation.

The police report that the operation started shortly after 5 a.m. and that three premises were searched. A Beretta sub-machine gun, cell phones, laptops and an amount of cash were found at one, while lit candles believed to be used in the act of witchcraft were found at the others. The police say the candles were oil-scented and labelled as clearance oil, ‘compellence’ oil and other potions and used by lottery scammers to assist them in their swindling operations.

The suspects were transported to St James for questioning.

When contacted, the Westmoreland police told The Gleaner that they were not prepared to comment on the operation, which they say was not coordinated from within the parish.