Mother whose children died in a fire granted bail 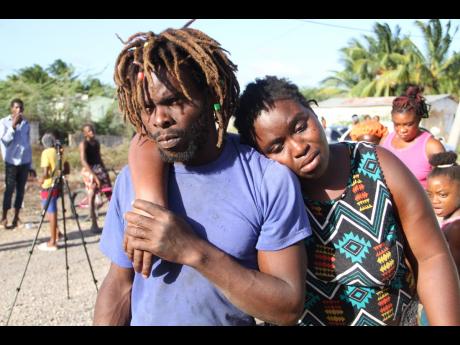 Nathaniel Stewart
Owen Tomlinsonson of Haylesfield, Clarendon, supports his partner Micey Walters after she returned from hospital following the death of her two children.

Micey Walters, the mother of two infants who perished in a fire in Hayesfield in Race Course, Clarendon, on March 24, was granted bail in the sum of $800,000 when she appeared in the Clarendon Parish Court yesterday.

The 27-year-old mother is answering to the charge of negligence under Section 9 of the Child Care and Protection Act, in relation to the deaths of her daughters, four-year-old Kayla Tomlinson and three-year-old Abigail Tomlinson.

Reports from the Exeter police are that at about 11 a.m., residents reportedly saw the house on fire and alerted them. The fire department was also alerted.

After members of the fire department carried out cooling-down operations, the charred remains of Kayla and Abigail were seen among the debris.

Walters is being represented by attorney-at-law Nickoy Ferguson.

“The Crown is alleging that Miss Walters neglected her children which resulted in their physical injuries and death,” Ferguson told The Gleaner.

“We are confident that Miss Walters is not guilty of the offence. I hasten to say, however, that this was a really tragic situation, and we don’t want to minimise it, but I will be representing Miss Walters as we go along, and I’m sure at an appropriate time, the court will hand down an appropriate ruling,” Ferguson added.

Walters is to return to court on June 3.