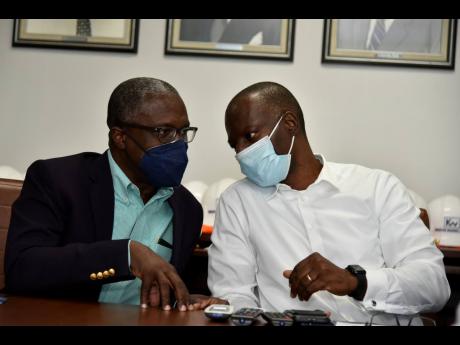 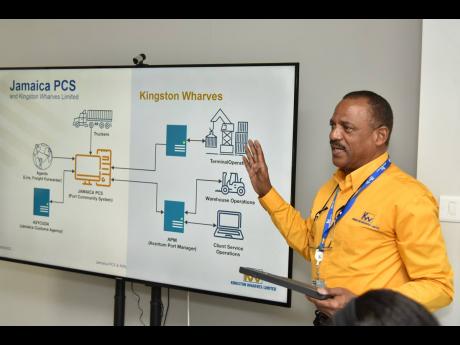 Kenyon Hemans/Photographer
Lancelot Green, IT director at Kingston Wharves, explains the benefits of the port community system to a visiting delegation of Barbadian port and shipping officials yesterday. 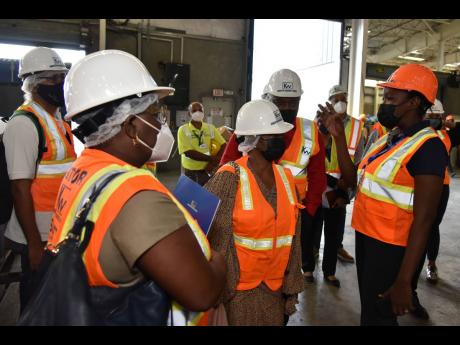 Kenyon Hemans/Photographer
Yanique Orr-Whyte Sr (right), warehouse operations coordinator, explaining aspects of the operations at Kingston Wharves Limited to a visiting delegation from Barbados, which is conducting a two-day tour of the island’s shipping ports.
1
2
3

Kingston Wharves Limited (KWL) showcased the benefits and efficiencies of the port community system (PSC) to a high-level public-private sector delegation from Barbados on Friday, with CEO Mark Williams using the occasion to impress upon them the need for regional integration in this area of the business.

In a meeting at the KWL corporate office, he told the delegation that as the Caribbean's leading multi-purpose, multi-user port terminal, Kingston Wharves has been leveraging the synergies of its combined port, warehousing and general logistics services to move cargo across the region and the world.

Speaking with The Gleaner afterwards, Williams explained that the PCS has allowed for information-sharing for the entire ecosystem of Jamaica's shipping business.

“The trucker can see what is on the system. The agencies – Customs, regulatory agencies and also at the terminal – can see also. Now, extend that to the Caribbean. So whenever a vessel is coming from Barbados, if we can access the Barbados PCS and Barbados can access our PCS and you do that across the region, that just redounds to better efficiency,” he said.

Williams said that the simplicity of the process is what makes it all that more effective, as a manufacturer or his agent could access the PCS and know where on the high seas his cargo is, coming into Jamaica from Trinidad or Barbados. In addition, he is able to track at every stage, what has been approved, which agency is left to approve and when and where to access his cargo.

Even though Jamaica is well ahead of the region, from the Caribbean Shipping Association perspective, efforts are under way to integrate all states.

Guyana already has some semblance of the PCS, while Barbados is in the process of embracing it, and some aspects are being explored in Trinidad and Tobago.

“So it's getting across the region, and when you [are] talking about one regional economic space, it's just going to make your life easier,” according to Williams. “Think of the Cricket World Cup. You landed in Jamaica and you were allowed everywhere else. That's what the PCS will do, integrate the Caribbean in shipping and trade – seamlessly.

“This is the way the world is moving and I am pleased to say that we are forerunners, certainly in the Caribbean with digital infrastructure,” Williams boasted.

KWL was the recipient of the 2021 Port Industry Award of Excellence for Technology and Innovation from the American Association of Port Authorities and the Organization of American States. This was in recognition of its significant strides in harnessing digital technology in various aspects of its operations. And the benefits are definitely being manifested, according to CEO Williams.

“Certainly, for Jamaica, we have what we call a terminal operating system. So that if there are 800 containers coming to Kingston Wharves or if there are 10,000 going to Kingston Freeport Terminal Limited, we know in advance and, therefore, we have the right number of resources, equipment and labour ready and waiting and, therefore, that just moves efficiently along,” he said.