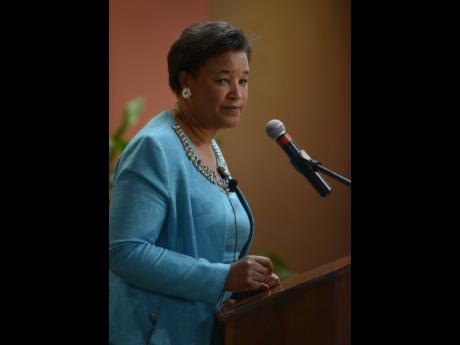 File
Baroness Patricia Scotland is facing the fight of her life as secretary general of the Commonwealth Secretariat.

Commonwealth Secretary General Baroness Patricia Scotland has urged integrity watchdogs in the Caribbean to be resolute in the war against corruption, which she said undermined the social and economic fabric and was one of the biggest impediments to achieving Sustainable Development Goals.

Scotland, who is touring the Caribbean in a charm offensive to secure votes against challenger Kamina Johnson Smith, Jamaica’s foreign affairs minister, said the Commonwealth Secretariat had played a critical role in the global fight against corruption.

“Every US$100 million lost to corruption could fund full immunisations for four million children or provide water connections for some 250,000 households,” Scotland said during her address to the 8th Annual Commonwealth Caribbean Association of Integrity Commissions and Anti-Corruption Bodies Conference on Monday

“... No country, region or community is immune. It infects education, health, justice, democracy, prosperity, and development.”

But she warned that the corrosive effect of climate change and once-in-a-century events such as the COVID-19 pandemic threatened small states like those in the Caribbean which were disproportionately exposed to exogenous shocks.

The limitations on economic opportunities, she said, worsened the risks for corruption.

The secretary general’s leadership has been under scrutiny since it was revealed that she had circumvented the customary competitive tendering requirement by awarding a lucrative consultancy contract to a friend’s company.

But Scotland has rebutted claims of corruption, saying no credible case had been made against her.

In a staunch defence of her stewardship on Monday, Scotland said that shortly after her election in 2016, she convened the Commonwealth Tackling Corruption Together conference to address the scourge in the public and private sectors.

The secretariat convened a meeting of experts to review and validate a package of 22 benchmarks addressing issues such as the disclosure of assets, rules on political lobbying, investigations, prosecutions, and sanctions.

“It speaks volumes about our work – and it is something of which we can be proud.”

She said she was convinced that the tide was beginning to turn.

“This is important for the Caribbean, but it is also instructive for the rest of the Commonwealth – and the wider world – because of the example this work sets for small states,” she said.