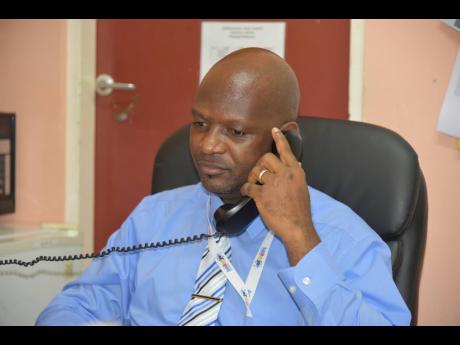 Herbert McKenis/Photographer
“I need for you to work assiduously to ensure that he is here in school. I am going to ask you, please reach out to us if you have challenges, please help me to help you,” Roan Green, principal of Petersfield High School in Westmoreland, pleaded with a 15-year-old’s mother over the phone on Wednesday. 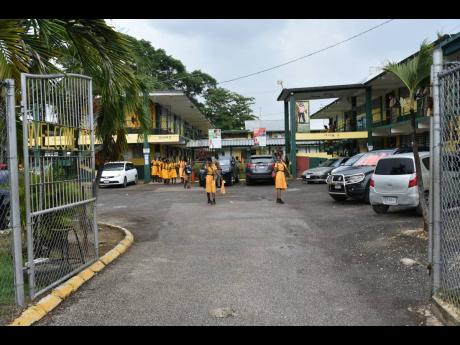 Herbert McKenis/Photographer
Petersfield High School in Westmoreland has a student population of over 1,700 on record, operating on a double shift system and is now facing the challenge of getting its full student cohort to return to face-to-face learning as part of its blended approach, which has become part of the education sector with the impact of the coronavirus pandemic since March 2020.
1
2

Administrators at the Petersfield High School in Westmoreland are actively seeking to re-engage a 15-year-old, third-form male student who they fear could be lost if allowed to be away from school and exposed to the influence of criminals. “I need...

Administrators at the Petersfield High School in Westmoreland are actively seeking to re-engage a 15-year-old, third-form male student who they fear could be lost if allowed to be away from school and exposed to the influence of criminals.

“I need for you to work assiduously to ensure that he is here in school. I am going to ask you, please reach out to us if you have challenges, please help me to help you,” Roan Green, principal of the central Westmoreland-based school, pleaded with the boy’s mother over the phone on Wednesday.

The teen had not been attending school regularly since the coronavirus pandemic broke out.

“Any problem you are having, send me a message for us to help, but I need for him to be here [at school],” Green said before terminating the phone call from his office.

While several other students are still missing from the classroom, paramount to Green’s quest is this 15-year-old, as he resides in the troubled community of Whithorn in the parish.

His concerns stemmed from unconfirmed reports that the teen has been associating with friends who are involved in questionable activities.

“The dynamics about this young man is one we are watching. We are not sure of his involvement and that is one of the reasons we are reaching out to him,” Green told The Sunday Gleaner.

“We know that he has friends who are involved out there, but we don’t know exactly what that is.”

“To me, he is a good boy and if he is not brought back into the fold quickly, we are going to lose him,” the principal said, noting that the student is literate and can perform academically.

“If we have him, we can monitor him, but with him not being here, we are not sure. He is not a dunce boy – he can read; he is bright – but he can be influenced as well. I just want to know that we can have him back.”

But the boy’s mother, who is a hairdresser, is puzzled at her son’s action, claiming she is unaware of any tangible reason for his refusal to attend school, especially knowing that she made the provision for him to do so.

“I leave him in the mornings, and when I go back home, I can see that he didn’t go to school because the money is still there,” she shared with The Sunday Gleaner in a telephone interview.

“Right now, I don’t know what has suddenly happened and why he is not going to school;, he is not talking. He is just more interested in playing games on his phone.”

When quizzed about his friends based on the concerns raised by the headmaster, the hairstylist dismissed the possibility of her son getting entangled with bad influencers, noting that he is usually asleep when she gets home from work.

“It is hard to say what is causing his decision not to go to school. But I am sure that he will not be recruited by any gangs or bad influencers,” she insisted. “I know of one of his friends from school. Like my son, he doesn’t leave home, but they talk on the phone. He is not being influenced negatively.”

She admitted that she has not yet had a discussion with him on his career path, but hopes to do so soon.

Petersfield High has a student population of over 1,700 on record, operating on a shift system. It is now facing a challenge of getting its full student cohort to return to face-to-face learning as part of its blended approach, which has become part of the education sector with the impact of the coronavirus pandemic since March 2020.

According to Principal Green, while the majority of his students are back at school, they have been using different means in collaboration with the Ministry of Education and Youth, through the Yard to Yard Find The Child initiative, to locate the missing students.

“That programme has proved to be successful because a lot of them came back,” he said, noting that his team of educators has been traversing the plains of Westmoreland, where they were able to find several students who have since returned to school.

“We are still working on the others. In terms of a direct figure, I can’t quote you one, but what I can tell you is that most of them are back already,” he noted, although the school is now facing another challenge – keeping on roll those who they have successfully convinced to return.

“We found them, and they have come back, but you will find them going back out after they have returned to school, so we have to be completing the process over and over in getting them back in school,” revealed Green.

The problem, he theorised, is as a result of financial challenges, coupled with other issues within the homes.

“It is an ongoing process and it is something that, as a school, I can assure you we are willing to walk with them day by day to get them back in school,” Green assured.

However, Green believes that with this new challenge, coupled with the decades-old dilemma of the double-shift system at his school, one of the ways in which the education ministry can help is to extend the Yard to Yard Find The Child initiative, which was launched last December to re-engage students.

“It was supposed to run for three months and the number of students we found in that time period tells me that if it continues, we will get there,” he noted.

The principal is also of the view that greater collaborations need to be forged with schools, parents and the wider school community, where parents will be required to play their part in monitoring their children better to ensure that they are, in fact, in school.

Further, Green argued that there are other factors to be considered even after finding students. Chief among them are parents who, for the most part, leave the responsibility to their children to indirectly make the decision whether to attend school.

“Some of the parents will leave and go to work and leave them to go to school, not knowing if they have left out because it is a shift school. When they leave in the mornings, for example, and school dismisses at midday, they don’t reach home from work until late, so sometimes they can’t validate that the child has gone to school,” he reasoned.