After COVID hit, operators say no to forgoing increase 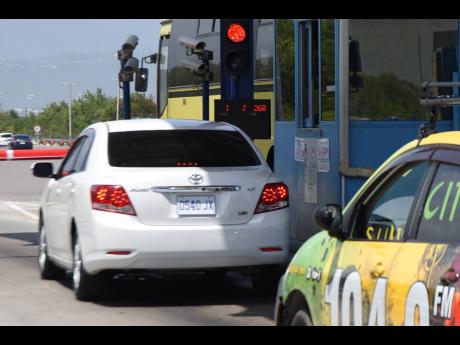 File
The toll plaza located in Portmore, St Catherine. The toll rate is set to be increased on Sunday, July 4 2021.

Concessionaires of Highway 2000 have said that they will not defer this year’s rate increases after losing millions of dollars in 2020 at the height of the coronavirus pandemic. Toll Authority of Jamaica CEO Lerone Laing made the disclosure on...

Concessionaires of Highway 2000 have said that they will not defer this year’s rate increases after losing millions of dollars in 2020 at the height of the coronavirus pandemic.

Toll Authority of Jamaica CEO Lerone Laing made the disclosure on Monday, following proposals for rate increases, which are expected to take effect on July 2.

The two are seeking increases which range between 9.09 and 26.67 per cent.

Laing said that in the throes of the pandemic, both companies delayed the implementation of the toll variation by six months in one instance and a year in another.

“In those instances in 2020, the operators were not compensated for what would be the tolls that they had forgone and we’re talking hundreds of millions of dollars,” he said in a Gleaner interview.

With recent concerns and pressures caused by a rising-cost-of-living crisis being faced by Jamaicans, there are worries over the looming rate hikes, which are due for consideration annually, according to agreements signed in 2003 and 2014.

“It (forgoing increase) has been done in the past. It’s just that in this instance, the operators have said, ‘Look, we have operations and maintenance fees and obligations that are being affected by the same economic realities that road users are feeling.’

“They are not isolated from those realities. It is impacting them as well ... . So that’s the reality, but it’s not to say that they haven’t been willing to hear or negotiate. They have done it in the past,” the CEO said.

Motorists who use the Portmore and Spanish Town toll plazas will receive discounts after their 10th trip following negotiations with the operators, Laing said.

The increases are also expected to significantly impact distribution companies and haulage contractors, who use the corridors for safety, to cut back on gas usage and delivery time.

On Monday, general manager of the Port Trailer Haulage Association, Ricardo Valentine, told The Gleaner that its members have had to pass off toll expenses to clients.

“We would have preferred for it not to come into effect now or for it to be deferred to when the economy is stronger. Most of our members pass these fees on to their clients, so their landing costs increase and, certainly, we empathise with them,” Valentine said.

But Wisynco Group Chairman William Mahfood has said that the majority of truckers, who are privately contracted by distribution companies, have ditched the highway because of the annual rate increases.

He said that a proposal for special rates for large distribution companies a few years ago was not accepted by toll road operators.

Mahfood said that the suggestion was to offer discounted fees in the late nights to early morning when the roads are less used, allowing for more efficient transportation, providing toll operators with more resources because of the collection of fees that they would have otherwise not received.

“Maybe even let that money help to support them in terms of maintaining lower rates to the public, but they never took us up on it,” he said.

“The majority of companies in the food distribution business in Jamaica operate with private contractors and the truth is that most of those private contractors who do delivery of food items and groceries and so forth, they don’t go on the toll road. It’s already too expensive. They feel it’s not worth their while using it,” he said.