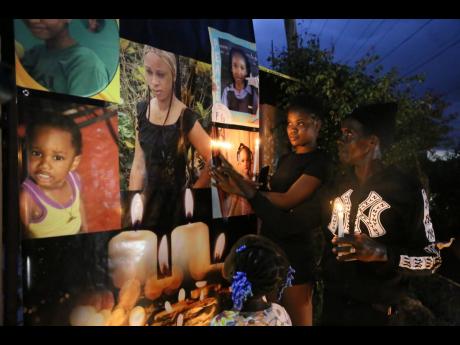 Nathaniel Stewart/Photographer
Peter Wright and daughter Ashanti look at photos of murder victims Kemesha Wright and her four children at a candlelight vigil in Cocoa Piece, Clarendon, late Wednesday. Mr Wright says the killer of his daughter Kemesha should be hanged.

The relatives of the Cocoa Piece family who were brutally slain last week have pushed back at rights lobby Jamaicans for Justice's (JFJ) appeal for restraint despite widespread approval for the death penalty locally.

Expressions of outrage and vengeance resonate in the relatively quiet rural Clarendon district where the bodies of 31-year-old Kemesha Wright and her four children were discovered at home with chop wounds and their throats slashed on June 21.

Peter Wright, father of Kemesha and grandfather to Kimanda Smith, 15, Sharalee Smith, 12; and five-year-old Rafaella Smith; and 23-month-old Kishawn Henry Jr, has rejected the JFJ's caution, saying that the egregiousness of the murders demands that the killer not spend the rest of his life behind bars.

“Because he does a very gruesome act, five innocent somebody him kill. Fi a man like that do a gruesome act like that, five one time,” his voice heavy with anger.

Wright said that he still hears the shrill cry of the dead infant Kishawn.

Oriel Smith, granduncle to the three girls, said he is still haunted by the death house. He feels as if he himself died that day.

Smith is demanding his pound of flesh in bringing the killer to justice on the gallows. But Jamaica last executed a criminal in 1988.

Pointing to a poster on the gate emblazoned with photos of the deceased, Smith sought to elevate what has been theorised to be a domestic dispute to a compelling matter on the national agenda.

In his opinion, little Kishawn could have been his baby or the prime minister's.

“Mi want the justice to do something about this guy. Him cannot live like this and people a talk bout him cannot hang. Him can't eat taxpayer money," he said.

That sort of volcanic fury is familiar in a country ranked as one of the bloodiest globally, with per-capita murders ranging between 40 and 60 per 100,000 population annually.

But the killing of children – viewed as among the most vulnerable victims – is known to spark incandescent rage among the public.

Rushane Barnett, a cousin to the Cocoa Piece quintet, has been charged with their murders. Prosecutors are seeking the death penalty. A plea has not been entered.

JFJ Executive Director Mickel Jackson said earlier this week that while she understood the public's outcry, mitigating factors should be considered, including the accused's age and whether he would confess to the crime.

“The accused in question, he is 23 years old. The question is, is he beyond rehabilitation? ... What else can we do while he is in prison to ensure that we can see a more reformed individual in society?” Jackson said in an interview with THE STAR.

But Jackson won't find many, if any, supporters in Cocoa Piece.

Family friend Rosemarie Henningham, who came to show her support for Wright's mother, Gwendolyn McKnight, expressed anger at the fact that the JFJ was yet to visit those left behind and offer sympathy.

“What kind of heart do these people have? They support criminality. They need to stop supporting criminality. Come out and defend these children instead,” said Henningham in a Gleaner interview.