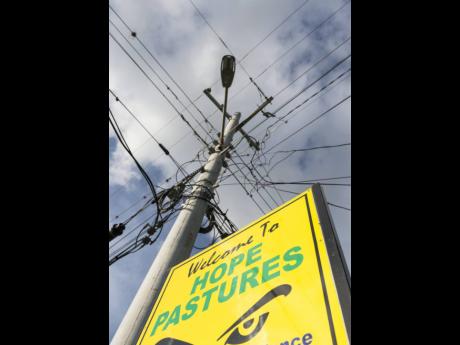 File
Hope Pastures residents have been embroiled in a years-long court case with the Jamaica Public Company Ltd over an underground electricity system.

Residents of Hope Pastures say they are shocked by Thursday's Supreme Court ruling which found that the Jamaica Public Service Company (JPS) was not obligated by law to cover the replacement cost for underground power supply in the upscale St Andrew community.

They are also gutted that the court declined them damages.

Led by the Hope Pastures Citizens' Association, householders embroiled in a decade-long dispute had sought a mandatory injunction from the court for JPS to restore and maintain the original underground supply that had been installed by a private developer more than half a century ago.

Thirty-three of the 94 residents who had initially brought a claim against the utility company were also seeking approximately $19 million in special damages for costs incurred in either connecting to overhead lines or sourcing alternative means of electricity.

But Justice Crescencia Brown Beckford, in her ruling Thursday, dismissed the application, noting that the power company’s statutory obligation did not include liability for an underground system that she accepted had outlived its usefulness.

“I am of the view that the evidence presented by the residents has failed to prove that JPS breached its statutory duty to maintain the Hope Pastures underground distribution system,” she said, noting that the failure was due to old age and obsolescence.

The judge also found that the JPS was not the owner of that power-supply system and that citizens would have to stand the cost of replacement.

Further, she concluded that JPS's action in connecting the residents to the overhead supply was necessary to fulfil its statutory duty.

“As it is clear that the underground system would not be replaced by the residents, all of the residents would have to connect to the overhead system or obtain their supply of electricity by alternative means.

"The expenses incurred by the residents would, therefore, have to be made by them based on their individual choices. The residual effect, therefore, is no loss sustained as a result of the actions taken by JPS," the judge said.

But president of the citizens' association, Michael Williams, said that he was “disappointed and confused".

“We thought she was going to rule that it is the JPS that owns the equipment, and if they own it, they must maintain it. But she accepted all the evidence of the JPS consultant without listening to what we had to say,” William said in a Gleaner interview Thursday.

However lead attorney for JPS, Patrick Foster, described the judgment as "solid" and well reasoned.

"It found that the underground system had failed because it is old and decrepit, not because of improper maintenance, and that JPS, although it had a statutory duty to maintain the system, had no duty to replace it. It has to be done at a cost by the residents,” Foster said.

In the meantime, Williams said the residents are non-committal on whether they will appeal the ruling. The official written judgment has not yet been published.

Hope Pastures residents had contended that the JPS caused them to suffer loss and damage as both the amenity and value of their properties had diminished because of what they deemed unsightly installation of concrete and wooden poles and overhead transmission lines.

But the JPS counterargued that it was forced to provide some residents with the overhead supply as the underground network had become unsafe, unreliable, and dysfunctional.

Dr Jennifer Mamby-Alexander, one of the conveners of the Hope Pastures Citizens Group, claimed in her testimony that she had spent $5.1 million to provide electricity for her home using a generator and solar power.