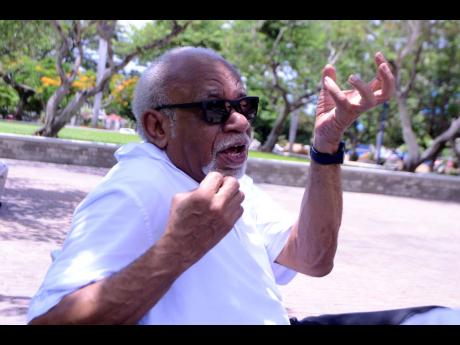 Kenyon Hemans
Photos by Kenyon Hemans/Photographer “We are now operating government more as a transactional state rather than a strategic development path for growth. We respond and react to things. And that is my major concern with the future of Jamaica at this point in time”: Kingsley Thomas. 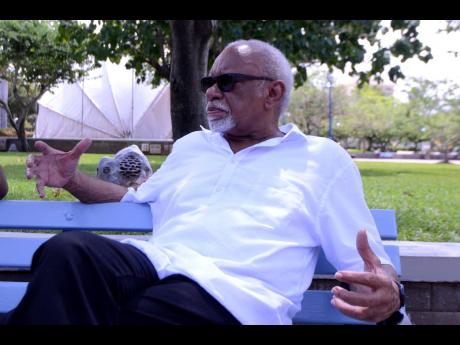 Kenyon Hemans
Kingsley Thomas relaxes at the Emancipation Park, the oasis he conceptualised and delivered 20 years ago in the bustling New Kingston business district.
1
2

Kingsley Thomas may have left the public service, but his mind has not retired. Known as someone who shoots from the hip, his contemporaries still describe him with superlatives such as visionary, passionate, bold and fearless, many quick to admit he is the smartest person they know.

On a beautiful summer morning last week at Emancipation Park – the oasis he conceptualised and delivered 20 years ago in the bustling New Kingston business district – he rapped past and current political administrations for being weak, pandering to the pavilion, lacking ideological direction and conducting the affairs of government like transactions which will not benefit the masses.

Sixty years after Independence, he said that Jamaica was not now at a crossroads. Instead, it had already reached that point years ago and had taken a wrong turn, failing to stop and assess its position and the way forward. And even though there are good people and established institutions of note, he insisted that the country was well down the wrong road, entangling itself in an unending debt trap.

Many persons, he said, have become filthy rich from the current economic climate, widening inequity, social breakdown, and the under-education of the youth, which leaves them as prime candidates for crime and violence.

“If you are in the business of making profit and you are making profit beyond your wildest imagination, why would you change the situation despite the chaos and mayhem out there?” Thomas said with exasperation.

Rumoured to have had a villa in France, millions in overseas bank account, and a mansion here, Thomas proudly showed off a near-two-decades-old Mercedes-Benz sedan last week. The rumours, the man who grew up as a poor boy in rural Jamaica said, were part of a plan to discredit him in the People’s National Party (PNP) “as it was felt that I was more popular than some of the leaders”.

Now a management and development consultant, he has two great fears – the first of which is the status of his brainchild, Emancipation Park, for which he bucked the board of the National Housing Trust (NHT) and purchased the then seven-acre dust bowl to transform it into a free and tranquil green space for Jamaicans to relax in the midst of the hubbub.

Worrying whispers of the location being eyed for high-end housing has Thomas fearing that the covenant of its ownership in perpetuity for the people of Jamaica could be changed.

Children squealed with delight as they enjoyed the park last Thursday. So, too, did the birds, chirping sweet melodies as scores of people enjoyed the space, which has also become a poplar spot for events.

Many traversing the park, which celebrates its 20th anniversary this month, recognised Thomas, who noted that it is just as he envisioned it – and then some.

“It’s an iconic, signature place in Kingston, which has now become a main feature, main attraction for tourists, visitors and Jamaicans alike. Most cities in the world have green spaces; we hardly have any. I think that if a decision is taken to revert the park to a residential or commercial [use] that there would be a massive outcry. The people, I believe, would speak, and that would prevent any change from taking place. People need somewhere to go ... ,” he told The Sunday Gleaner.

Thomas said that his office at the Development Bank of Jamaica (DBJ) overlooked the dust bowl and recalled seeing an elephant being bathed – and defecating – there after a circus event. The young boys sleeping there also forced him into action and he called then Prime Minister P.J. Patterson and pitched his vision to transform the space.

To deliver the project on time, Thomas and his team were often there well into the wee hours of the night. A nerve-racking period of construction with the finest attention to detail had it ready by July 31, 2002.

“I said to him, ‘Mr PM, it’s you who declared Emancipation Day a holiday.’ I said, ‘Would you mind us calling the park Emancipation Park?’ He said ‘no’. That was the end of the discussion,” Thomas shared.

A furore erupted over the statues of a naked couple at the main entrance, but Thomas remains unapologetic for the choice of the art representing Emancipation.

His second real fear is for Jamaica – where it is heading.

Thomas denied being part of the Patterson ‘kitchen cabinet’ – an unofficial adviser of sorts – but many believe he was the ideator behind the consolidation of government assets for greater efficiency in the public sector and for which the administration was credited. The merger of the Agricultural Credit Bank and the National Development Bank to form the DBJ was one such consolidation.

But sadly, he said, Jamaica has veered off course since Independence in August 1962.

“We have taken a wrong road and we have not had the courage to turn back and take another road, because the road that we are on is clearly not a road for progress. It’s not a road for improving the quality of life of the majority of people. I would say there is a veneer of prosperity that you see in the high-end motor cars and big apartments going up, but that is not a true indicator of development,” he suggested.

“ ... One of the problems Jamaica has faced over the past 60 years has been a lack of continuity in terms of plans, programmes and development. And this is not being critical of any one administration. What has caused us not to really achieve the level of development, employment, growth creation, social cohesion – which is very critical – is that the political leadership, they think in terms of five-year cycles,” Thomas argued.

And while the country has all the indicators of a modern society, it cannot feed these indicators, he stated.

According to Thomas, Jamaica is behind the eight ball in areas such as education, employment, social cohesion and crime control, with a paradigm shift needed instead of creeping incrementalism.

“I honestly feel that Jamaicans can achieve greatness at home. They have achieved greatness abroad, but what is required is leadership and motivation and I think all of those ingredients were there to complete the park ... . It is needed elsewhere,” he insisted.

Thomas said that the current administration’s plan to grow the economy by five per cent in four years did not have the support system required for its success.

“In all frankness, COVID intervened and impacted the five-in-four plan. A lot a people are happy that COVID intervened so they have an excuse ... . Blame must also be laid with the multinationals for consistently imposing on us certain restrictions as to how we should do things which have not benefited the country,” he told The Sunday Gleaner.

“We are now operating government more as a transactional state rather than a strategic development path for growth. We respond and react to things. And that is my major concern with the future of Jamaica at this point in time,” he said.

Jamaica’s geographic position makes it ideal as a trans-shipment hub, and with the COVID-19 pandemic and the Russia-Ukraine conflict exposing weaknesses in the global supply chain, Thomas believes that more focus should be placed on developing the island’s ports to capitalise on the island’s location.

A long-time advocate for the development of the Vernamfield Aerodrome, he noted that this was one of 10 projects he had pitched to the Patterson Cabinet, showing The Sunday Gleaner some documents. The Airport Authority of Jamaica is now implementing a plan to rehabilitate at least one runway at Vernamfield, a former World War II United States Army Air Forces airfield in Clarendon.

Thomas also sees agriculture as a big-ticket item for economic development, noting that the current import deficit must be reversed and drastic measures adopted to end praedial larceny.

Highway 2000, he noted, was an idea for the future which has become a catalyst for roads.

While the financial sector collapse of the 1990s devastated the economy, he said that the NHT was able to purchase vast swathes of land for future development, including 15,000 acres at Inverness, near Longville Park in Clarendon, for the development of a new town.

“There are people who have this concept that NHT must operate on flat lands out of Portmore. I wanted to introduce a new product called homestead, where you could have someone with a two acres around his house. Flat lands must be used for agriculture, and that’s why I came out against the use of Bernard Lodge for what it is. We had to have lands on which to build and the NHT had the resources to buy land in a land bank and offer a wider range of products,” he explained.

Other purchases include 173 acres from a PNP supporter whose business went belly up. He said the purchases were purely selfish, but gave the entity the advantage of cheap land ownership for later development. A portion of the 173 acres was used to construct the multipurpose stadium in Trelawny.

Thomas said Jamaica’s development plans are cyclic and, for the most part, lack input from nationalists who are forward-thinkers. Too many persons, he lamented, are too comfortable being in their bubble, which shields them from the real-life experiences of ordinary Jamaicans.

Still, he yearns for a brighter future for Jamaica.

“People think I have money; I don’t. I still live in Cross Roads. I have a 13-year-old Toyota Prado. I don’t waste money. People say for all that I have done, I must have money, but everything that I have done have cost me personally,” he told The Sunday Gleaner. “They say I am gambler, that I am an alcoholic, but whatever they want to say, I am a nationalist. I want things to be better.”